This is the 2nd consecutive month that BAD showed up as a top performer. While there was no incremental news in April, outside of a new CFO appointment, there is growing evidence that hydrovac excavation is gaining wider acceptance due to its safety and efficiency advantages over traditional techniques. The runway for growth is significant with BAD aiming to once again double its revenue base.

BAM.A is one of the largest alternative asset managers in the world with over $300 billion in AUM. They are value investors in the alternative  space (real estate, infrastructure, private equity) which is seeing secular tailwinds from institutional investors, increasing allocations to alternative asset classes. BAM.A has raised $20B in capital in the last 12 months and is expected to generate significant free cash flow over the coming decade, providing it with multiple levers for value creation.

EFN is the largest publicly traded fleet management company in North America. The new CEO has executed well on the turnaround story with material earnings improvement targeted over the next several years. We like turnaround stories, especially in uncertain economic climates, as value levers are in management's control and expect the stock's multiple to re-rate higher as ROE metrics improve.

DRT is another turnaround story that is also redefining commercial interior design and construction processes through its proprietary software and manufacturing capabilities. Despite a 20%+ 5-year revenue CAGR, virtually all senior management positions have been replaced so as to create a company that can scale the significant growth opportunity in front of it. The strategy is to leverage DRT’s technology and position it as a technology solution (vs. a construction solution) alongside bringing in better processes/KPIs/accountability into sales, marketing, manufacturing and capital allocation. Demand for DRT solutions is strong, evidenced by strong growth rates, particularly 59% growth in health care and 29% growth in education, with a massive growth runway given < $400M in current revenue against a $150B market. Other catalysts include a U.S. listing and potential for additional sell-side coverage given only 6 analysts currently cover the company.

The Fund held a 27.7% cash weighting at month-end, down from 45.7% at the end of March. The fund has generated substantial value to investors over its long-term history, driven by the combination of strong company-specific catalysts and a concentrated portfolio. We continue to look forward to strong results as we progress through 2019 and beyond. 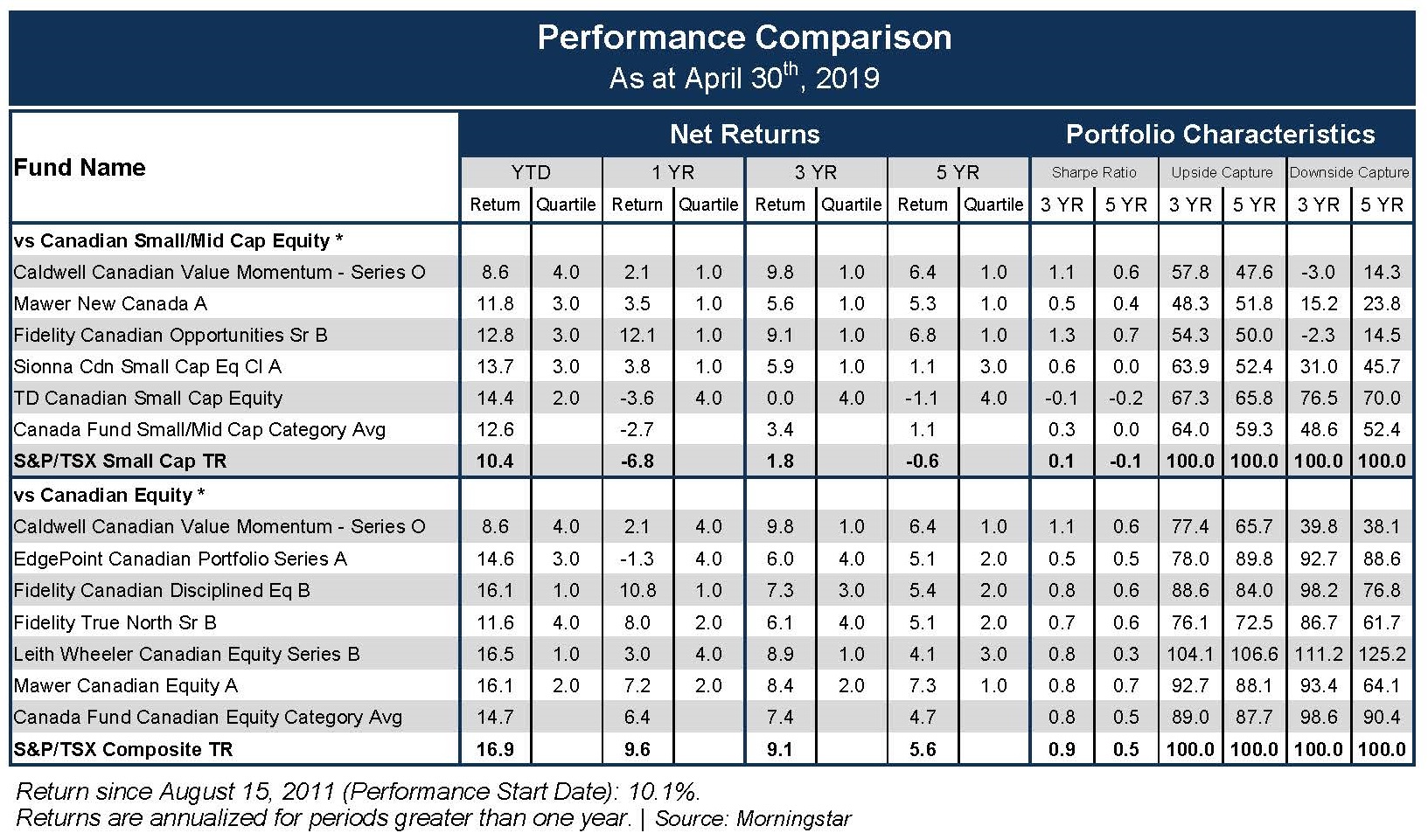 The Fund was not a reporting issuer offering its securities privately from August 8, 2011 until July 20, 2017, at which time it became a reporting issuer and subject to additional regulatory requirements and expenses associated therewith.

The information contained herein provides general information about the Fund at a point in time. Investors are strongly encouraged to consult with a financial advisor and review the Simplified Prospectus and Fund Facts documents carefully prior to making investment decisions about the Fund. Commissions, trailing commissions, management fees and expenses all may be associated with mutual fund investments. Rates of returns, unless otherwise indicated, are the historical annual compounded returns including changes in unit value and reinvestment of all distributions and do not take into account sales, redemption, distribution or optional charges or income taxes payable by any unitholder that would have reduced returns. Mutual funds are not guaranteed; their values change frequently and past performance may not be repeated. Publication date: May 9, 2019.