The Fund gained 1.6% in March versus a loss of 0.2% for the S&P/TSX Composite Total Return Index ("Index”). The Index's performance was mixed on a sector level, with the strongest performance coming from REITS (+1.7%) and the Gold sub-sector (+6.8%) while Industrials (-2.4%) was the worst performer.

One of the core features of the CCVMF is investing in stocks that have the ability to unlock value regardless of the market's underlying performance. The Fund's out-performance this month is telling given its largest sector exposure - Industrials (38% of the portfolio at month end) - was also the market's worst performing sector. Looking at the CCVMF's individual holdings within Industrials, 8/10 (80%) out-performed the Industrials sector while 6/10 (60%) posted a positive return in a down market. This type of performance is the result of a high-conviction portfolio of stocks with strong company-specific catalysts, made possible by a proprietary, bottom-up, investment process.

This is the 3rd consecutive month that the CCVMF out-performed the Index in a down market. Since inception (Aug 2011), the fund has outperformed the Index in 23 of 30 down months for a 77% success ratio. The CCVMF's return and down-capture in March led all of its peers in the Canadian Equity category. The CCVMF's down capture in March was actually negative (a good thing) given the Fund posted a positive return in a negative market.

Top CCVMF performers in March were Premium Brands Holdings (PBH: +14%) and Stuart Olsen (SOX: +12%). While PBH reported a mixed quarter, issues seem to be temporary and the company continues to progress with its acquisition strategy, having announced 4 acquisitions that will be accretive to current year earnings. The company’s guidance was in-line with the consensus estimate but did not include any contribution from these acquisitions. This suggests upside to the company’s guide and analysts estimates have moved higher accordingly. Stuart Olsen had a very strong quarter with a 14% EBITDA beat driven by higher than expected margins. Leverage and payout positions have improved significantly and the company is making progress on its diversification efforts, evidenced by new contract wins.

No stocks were added to the portfolio in March.

The Fund held a 29% cash weighting at month end. As previously discussed, we expect cash balances to move lower as we progress through the CCVMF's investment process. In the meantime, we look forward to tracking the progress of the portfolio’s holdings as we see a meaningful and diverse set of catalysts to drive continued growth. 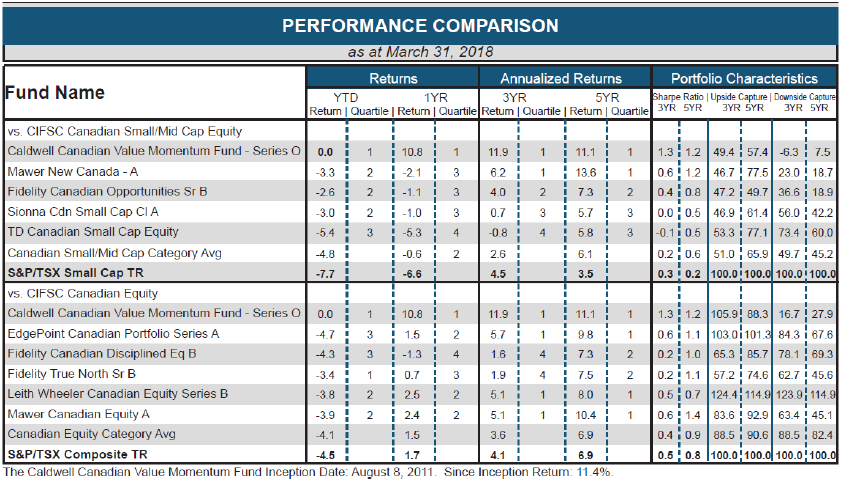