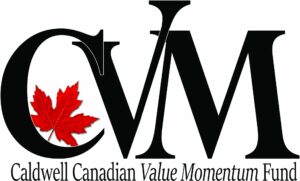 The Caldwell Canadian Value Momentum Fund (“CVM”) out-performed the S&P/TSX Composite Total Return Index (“Index”) by nearly 200 basis points, with a decline of 15.5% in March versus a loss of 17.4% for the Index, as the COVID-19-driven sell off that started in February accelerated in March. Energy (-31.5%) took the hardest hit on the back of a 45.7% drop in WTI Crude Oil and Western Canadian Select dropping to $4.69/barrel on March 30th, prompting commentators to note that one could buy a barrel of Canadian oil cheaper than one could buy a pint of beer. Gold (-3.6%) was the strongest performer but even it couldn't muster a positive return in the face of severe, risk-off selling. There was also a significant negative skew to the Index return, with the median stock down 22.4% - a full 500 basis points worse than the Index return - and only 38% of the Index constituents out-performing the Index return.

In a month of record setting volatility, one in which the Volatility Index (“VIX”) hit a new all-time closing high at 82.69, the CVM’s volatility, as measured by its beta, was only 0.65. The CVM’s overall risk profile was especially beneficial during the sizeable drawdowns seen throughout the month: there were 11 down days in March, 3 of which saw drawdowns greater than, or just below 10%. In those three days, the CVM’s downside capture averaged close to 64%, which equated to almost 12% of outperformance relative to the TSX.

There were only 10 stocks in the TSX that posted a positive return in March, two of which were held in the CVM: Real Matters (“REAL”) and Metro (“MRU”). Metro, which operates 950 grocery stores and 650 drugstores, was purchased in December 2018, is a clear beneficiary of COVID-19 stock-piling and restaurant closures. REAL was purchased in August 2019 and is a great example of the indiscriminate selling witnessed in March. The company has created an Uber-type platform that connects mortgage lenders with title and closing field agents, significantly improving the speed, cost and accuracy of the process. The company is seeing high demand from refinance activity on the back of the U.S. 10-year yield falling from 1.92% at the start of the year to 1.13% at the end of February and 0.7% at the end of March. Despite the favourable backdrop for REAL's business, the stock traded down to a low of $7.74 per share on March 18th, down approximately 52% from its high of $16.03 on February 13th. This prompted the CEO to schedule an update call the following day, in which he noted that business is booming and stronger than ever. The stock has since rallied back to approximately $15 per share at the time of writing.

We often get asked, "What is your view of the market going forward?" While this question is not easy to answer in the best of times, it is increasingly difficult to answer in the current market environment given the many cross-currents currently at play. On the positive, governments around the world are now singularly focused on winning this "war" against the virus, with monetary and fiscal policy having reached new levels on ‘do whatever it takes’ philosophies. Death counts thus far are well-below original estimates but that's because societies and economies have been put on hold - the only tool that's available to minimize the virus spread until a vaccine becomes available, which is still months and months away. The U.S. has seen 6.6 million jobless claims over a 3-week period, far outstripping previous highs, even during the Great Financial Crisis. But the market rallied on this news given the aforementioned government responses and given a market that was already off significantly from its highs. With the market recently rallying off of the first wave of selling, it suggests that investors have re-positioned their portfolios to the new reality. However, the situation is fluid and we expect news coming out of first quarter earnings for U.S. companies starting this week will prompt additional adjustments and therefore volatility.

Our CEO is a canoer and often uses a river as an analogy to the market. Sometimes the river is smooth and one can look far downstream without having to change course. Once the river turns to rapids, however, one must have the flexibility to adjust to what the river throws. It's important to have an investment strategy that can quickly adjust to the market, and that's exactly what the CVM is designed to do. At the time of writing, year-to-date turnover is nearly 100% and the portfolio today looks significantly different than at the start of the year.

Two stocks were added to the portfolio in March: Open Text (“OTEX”) and Toromont (“TIH”). Open Text develops enterprise information management (“EIM”) solutions and is the largest independent EIM vendor. The company has approximately 75% in recurring revenue from its maintenance and cloud businesses, which is attractive in the current environment. Management has a strong history of capital allocation and we expect opportunities to make acquisitions at more attractive valuations through this downturn. Toromont operates the Caterpillar dealerships in Ontario, Quebec, Manitoba, Nunavut and the Maritimes and also operates Canada's largest industrial refrigeration company. The company has self-help value creation levers through last year's acquisition of Hewitt, along with the rollout of rental operations in Quebec. The company should benefit from higher infrastructure spending in its markets. We continue to remain active in making portfolio adjustments and note that four additional names were initiated after month-end.

The Fund held a 20.7% cash weighting at month-end and 10.1% at the time of writing. The CVM has generated substantial value to investors over its long-term history driven by the combination of strong company-specific catalysts and a concentrated portfolio. We continue to look forward to strong results as we progress through 2020 and beyond. 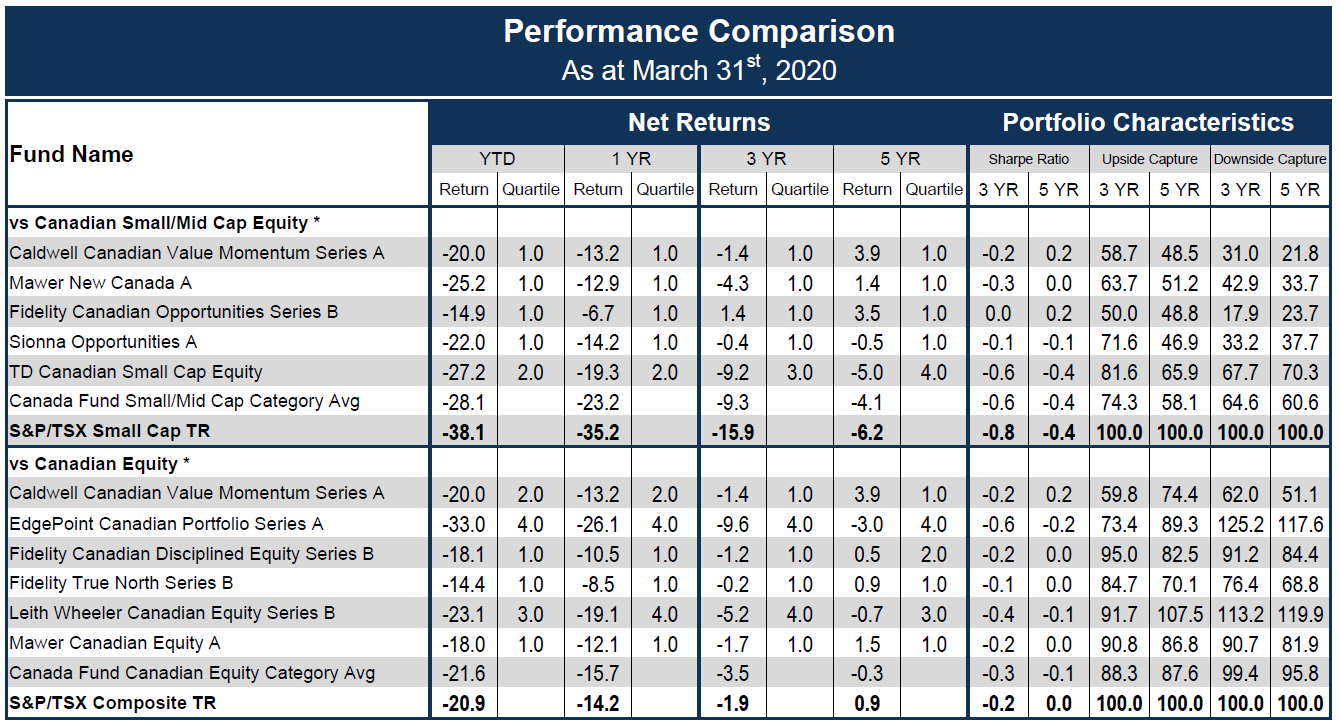 The information contained herein provides general information about the Fund at a point in time. Investors are strongly encouraged to consult with a financial advisor and review the Simplified Prospectus and Fund Facts documents carefully prior to making investment decisions about the Fund. Commissions, trailing commissions, management fees and expenses all may be associated with mutual fund investments. Rates of returns, unless otherwise indicated, are the historical annual compounded returns including changes in unit value and reinvestment of all distributions and do not take into account sales, redemption, distribution or optional charges or income taxes payable by any unitholder that would have reduced returns. Mutual funds are not guaranteed; their values change frequently and past performance may not be repeated. Publication date: April 14, 2020.

The Lipper Fund Awards are based on the Lipper Leader for Consistent Return rating, which is a risk-adjusted performance measure calculated over 36, 60 and 120 months. Lipper Leaders fund ratings do not constitute and are not intended to constitute investment advice or an offer to sell or the solicitation of an offer to buy any security of any entity in any jurisdiction. For more information, see lipperfundawards.com. Lipper Leader ratings change monthly. Lipper Fund Awards from Refinitiv, ©2019 Refinitiv. All rights reserved. Used under license. The Caldwell Canadian Value Momentum Fund Series A in the Canadian Equity Category for the 5-year period (out of a total of 69 funds) ending July 31, 2019. Lipper Leader ratings: 5 (3 years) and 5 (5 years).