The Fund outperformed the S&P/TSX Composite Total Return Index (“Index”) by 260bps in May, declining 0.5% versus a loss of 3.1% for the Index. The Index saw wide dispersion in sector performance with Technology (+4.3%) and Gold (+3.3%) showing strong gains, while Health Care (-13.8%), Consumer Discretionary (-8.7%), and Financials (-5.1%) posted significant declines. The Fund continued its habit of out-performing a declining Index. Since inception (August 8, 2011), the Fund has now outperformed the Index in 28 of 35 down months for a 80% success ratio.

We initiated a position in AC in late April and built up a full position by early May (thesis, below). The stock responded positively to two events: i) a Q1 report that was better than feared given disruption from the grounding of Boeing's 737 Max planes; ii) the announced acquisition of Transat which increases AC's focus on leisure product and has the potential for significant cost synergies.

EFN responded positively to solid Q1 results and a 10% increase to its 2020 EPS guidance, which suggests that management is making significant progress on its profitability plan.

While broad-based strength in gold helped, KL also traded higher on company specific news with a strong Q1 result that saw improved guidance at its Fosterville and Macassa mines alongside a 30%+ increase to the dividend.

One stock was added to the portfolio in May: Air Canada ("AC").

Air Canada is Canada’s largest domestic and international airline serving more than 200 airports on six continents. The company has dramatically improved its business over the last several years, resulting in a significantly reduced cost structure, strong balance sheet, better cash flow generation, and higher return on invested capital. Despite this, the stock continues to trade at a meaningful discount to U.S. peers which, in turn, trade at a substantial discount to the broader market. There continue to be self-help levers for management to drive additional upside, including the addition of Aeroplan and Transat.

The Fund held a 23.4% cash weighting at month end, down from 45.7% at the end of March. The cash weighting at the time of writing is 12.5% as two positions were initiated in early June. The fund has generated substantial value to investors over its long-term history driven by the combination of strong company-specific catalysts and a concentrated portfolio. We continue to look forward to strong results as we progress through 2019 and beyond. 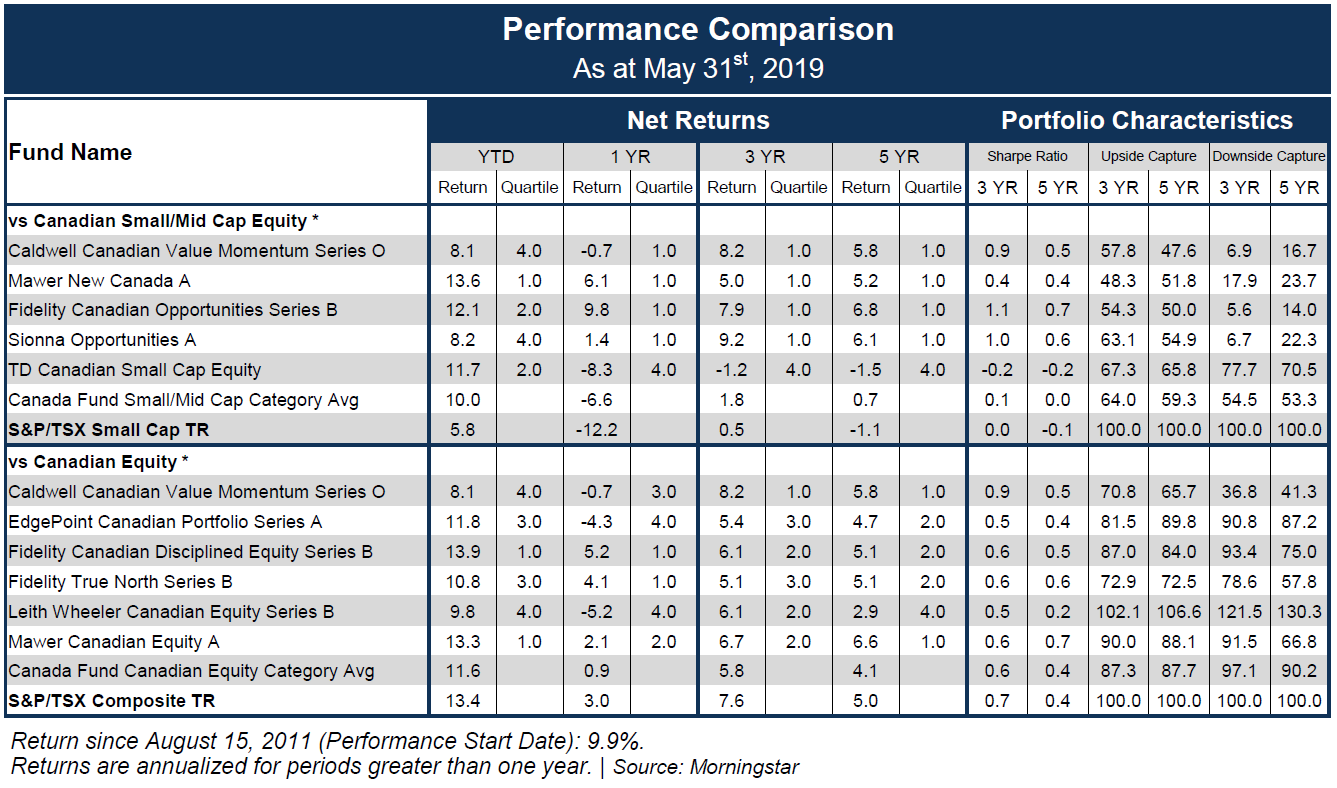 The Fund was not a reporting issuer offering its securities privately from August 8, 2011 until July 20, 2017, at which time it became a reporting issuer and subject to additional regulatory requirements and expenses associated therewith.

The information contained herein provides general information about the Fund at a point in time. Investors are strongly encouraged to consult with a financial advisor and review the Simplified Prospectus and Fund Facts documents carefully prior to making investment decisions about the Fund. Commissions, trailing commissions, management fees and expenses all may be associated with mutual fund investments. Rates of returns, unless otherwise indicated, are the historical annual compounded returns including changes in unit value and reinvestment of all distributions and do not take into account sales, redemption, distribution or optional charges or income taxes payable by any unitholder that would have reduced returns. Mutual funds are not guaranteed; their values change frequently and past performance may not be repeated. Publication date: June 13, 2019.