The Fund gained 4.8% in October versus a gain of 2.7% for the S&P/TSX Composite Total Return Index ("Index”). The Financial sector (+4%) drove the market higher on a 4.5% gain in the Banking Index. The Utilities, Consumer Discretionary, Telecom and Industrials sectors were also strong, each up over 3%, offset by declines in Energy (-0.4%) and Health Care (-0.3%). Strength in the CCVMF portfolio was broad-based with nearly 80% of stocks out-pacing their sector returns and only 4 stocks under-performing the broader market.

Top CCVMF performers in October were Calian Group (+16.2%), Martinrea (+11.6%) and WSP Global (+11.4%). Calian announced  a contract renewal with the Canadian Armed Forces, which removed a key overhang on the stock and provides incremental revenue opportunity with an initial four year term totaling $275 million plus an eight-year extension option for an additional $600 million. While there was no company-specific news behind Martinrea's move, strength in auto sales in both Canada and the U.S. are positive for auto-suppliers. WSP moved higher following its Analyst Day in late September. While there were no major changes to the outlook, investors walked away with increasing confidence in WSP's growth and diversification strategy and attractive runway of opportunity.

Two stocks were added to the portfolio in October: Chorus Aviation (CHR) and Empire (EMP.A). Chorus is in the businesses of contract flying, aircraft leasing and aviation services.  The contract flying business is dominated by a capacity purchase agreement (CPA) with Air Canada (AC) where Chorus operates scheduled service under the Air Canada Express brand. Now that investors have become comfortable with the economics and cash flow generation of the new CPA signed with AC in 2015, focus has shifted to the opportunities in growing the aircraft leasing portfolio, where Chorus has become a major player in the regional jet market. Demand in this part of the market continues to be robust as the world's fleet of regional jets is only 20-25% leased versus commercial jets at 40%+. Empire is a food retailer operating under the Sobeys, Safeway, IGA and Freshco brands. After years of poor execution following the Safeway acquisition, a new management team has been put in place to execute a turnaround plan that involves accelerating sales growth and extracting meaningful cost savings. Early progress looks promising as the company recently posted its first positive tonnage quarter after thirteen consecutive quarters of negative tonnage, while simultaneously improving margins.

One of the key features of the CCVMF is that it is a very complementary portfolio to other Canadian Equity strategies. The Fund's proprietary screening process allows us to identify under-the-radar companies that have tremendous opportunity to grow in value. One such company is Calian Group (noted above), whose CEO, Kevin Ford, was recently featured in the Ottawa Business Journal as the 2017 CEO of the Year. Calian was initially purchased in the CCVMF in February 2016, with the stock up nearly 80% since that time.

The Fund held an 11.2% cash weighting at month end. We look forward to tracking the progress of the portfolio’s holdings as we see a meaningful and diverse set of catalysts to drive continued growth.


We thank you for your continued support. 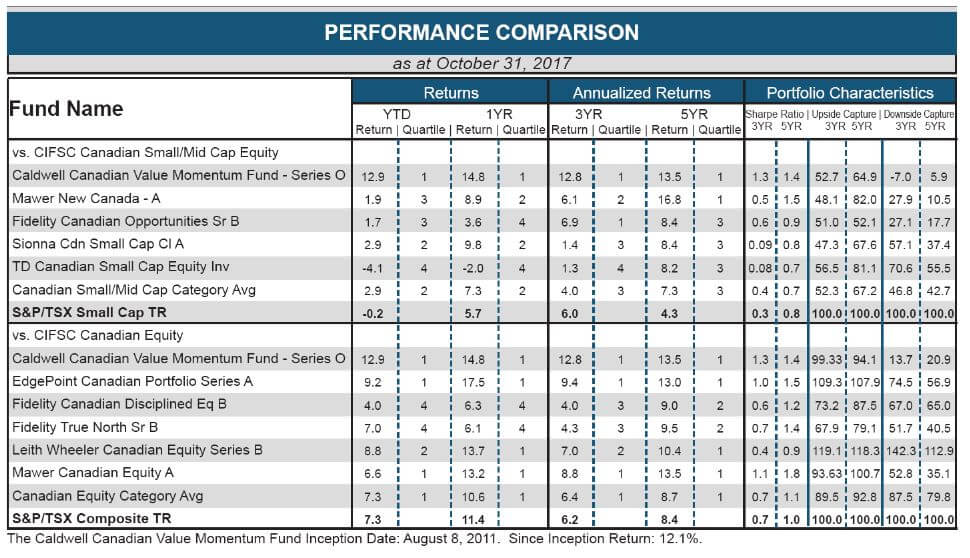