The Fund declined 5.5% in October versus a loss of 6.3% for the S&P/TSX Composite Total Return Index ("Index”). This was the worst monthly decline for the Index since the 8.7% drop in September 2011. All sectors in the market experienced declines with Health Care (-17.7%), Energy (-9.2%) and Technology (-8.1%) faring the worst. The only place investors found shelter was in the Gold Sub-Sector (+3.7%), although there was likely some recovery off of oversold levels, as the Gold Sub-Sector remains down 19.1% year-to-date.

Of the 247 stocks in the Index, only 47 (19%) posted a positive return in October. Excluding gold, this number drops to 33 or 13%. It was clearly a broad-based risk-off market and the CCVMF's holdings were not immune. What drove the CCVMF's out-performance in October was the fund's substantial cash weighting, a product of the strategy's embedded sell discipline. This led to the 6th consecutive time that the CCVMF out-performed the Index in a down month. Since inception (August 2011), the fund has outperformed the Index in 26 of 33 down months for a 79% success ratio. Year-to-date, the CCVMF ranks in the top 1% of all Funds within the Canadian Equity category. 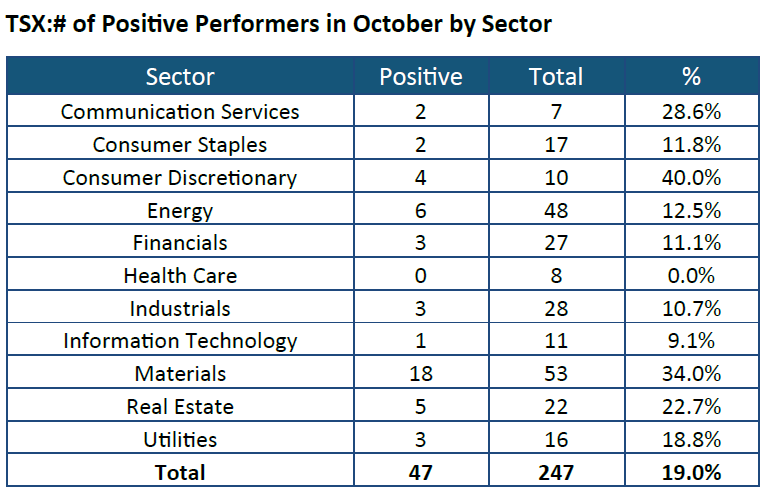 Top Performers in October were North American Construction Group ("NOA": +11.3%) and Parkland Fuel ("PKI": +1.8%). NOA's strong performance comes on the back of another strong earnings report where EBITDA beat analyst expectations by over 50%. We see several positive catalysts for the stock going forward and the stock remains attractively valued, trading at <9x their 2019 EPS guidance. PKI announced the acquisition of Sol Investments in October. Sol is the largest fuel distributor in the Caribbean and this move significantly expands PKI's supply footprint.

Three stocks were added to the portfolio in October: Element Financial ("EFN"), Aecon Group ("ARE") and Aritzia ("ATZ"). Element is the largest publicly traded fleet management company in North America. A new CEO has been appointed to execute a turnaround strategy with internal initiatives driving material earnings improvement over the next few years. Companies that have the ability to unlock value through actions that are within management's control are particularly attractive in today's market. Aecon is a leading Canadian construction company that has secured a record $7B backlog as construction markets have shifted towards the company's wheelhouse (light rail, hydro-electric power, to name a few). We expect an increasing margin profile going forward as well as a higher percentage of recurring revenue through master service agreements in utilities, telecom and contract mining. Aritzia is a fashion retailer of women's apparel and accessories that is seeing strong brand adoption, particularly in the U.S. where there is a long growth runway. The company has only 24 stores in the U.S. today, versus 66 in Canada. Aritzia is targeting a niche area of the market, providing higher quality than fast fashion, but greater affordability than the top fashion design houses. Same-store-sales grew to 11.5% last quarter with 40% revenue growth in the U.S.

The Fund held a 40% cash weighting at month end. Our priority in this market is to remain disciplined in our decision-making, continuing to focus on companies that have strong catalysts to drive their share prices higher.

FundGrade ratings are to be used for information purposes only and are not intended to provide financial, tax, accounting, legal or investment advice. You should not rely FundGrade ratings in any way. If you need information about a specific financial, tax, accounting, legal or investment issue, you should consult an appropriately-qualified professional adviser. Fundata does not make any recommendations regarding the advisability of investing in any particular security or securities generally. You agree that these ratings or any other information made available through Fundata are not a substitute for the exercise of independent judgment and expertise.