“What – me worry?” This is the famous catch phrase of Alfred E. Newman, the fictitious mascot and cover boy of American humour tabloid, Mad Magazine. It also happens to be the mindset of the global investment community given the extremely small range the S&P 500 traded within the month of April. Every time the market showed weakness, investors stepped in to soak up the downpour of selling. Mainstream media caught on to this and focused their collective attention to the depressed levels of S&P 500, Chicago Boards Options Exchange (“CBOE”), Volatility Index (“VIX”). This volatility is meant to be forward looking and is often referred as the investor “fear gauge” (hence why the media loves to talk about it). “Forecasted annualized standard deviation” simply does not have the same ring to it. The VIX measure shows the markets expectation of 30 day volatility (annualized) using the implied volatilities of S&P 500 put and call option contracts. Actual realized volatility has been on a steady decline since the 2016 U.S presidential election and appeared to evaporate in April. The truth is that option sellers have been doing very well for themselves. The actual annualized volatility of the S&P 500 (from closing prices) was 7.3% in April, far below the 10.8% level at the end of the month and miles below the mid April highs of 16%. Investors are stepping in every time a sell off occurs thus muting volatility and options sellers appear to be taking advantage of this. As long as markets are heavily bid, expect to see the VIX continue at these levels and possibly decline.

Looking at earnings for the first quarter of 2017, it is easy to see why investors are happy to step in and buy when the market sells off. S&P 500 firms’ earnings results from the first quarter of 2017 have largely beat estimates. So far, more than 75% of firms have reported actual Earnings Per Share (“EPS”) above analyst estimates. In aggregate, companies are beating analyst EPS estimates by an average of 6.0%. At the sector level, the Information Technology (82%), Financials (82%), and Health Care (81%) sectors have the highest percentages of companies reporting earnings above estimates. 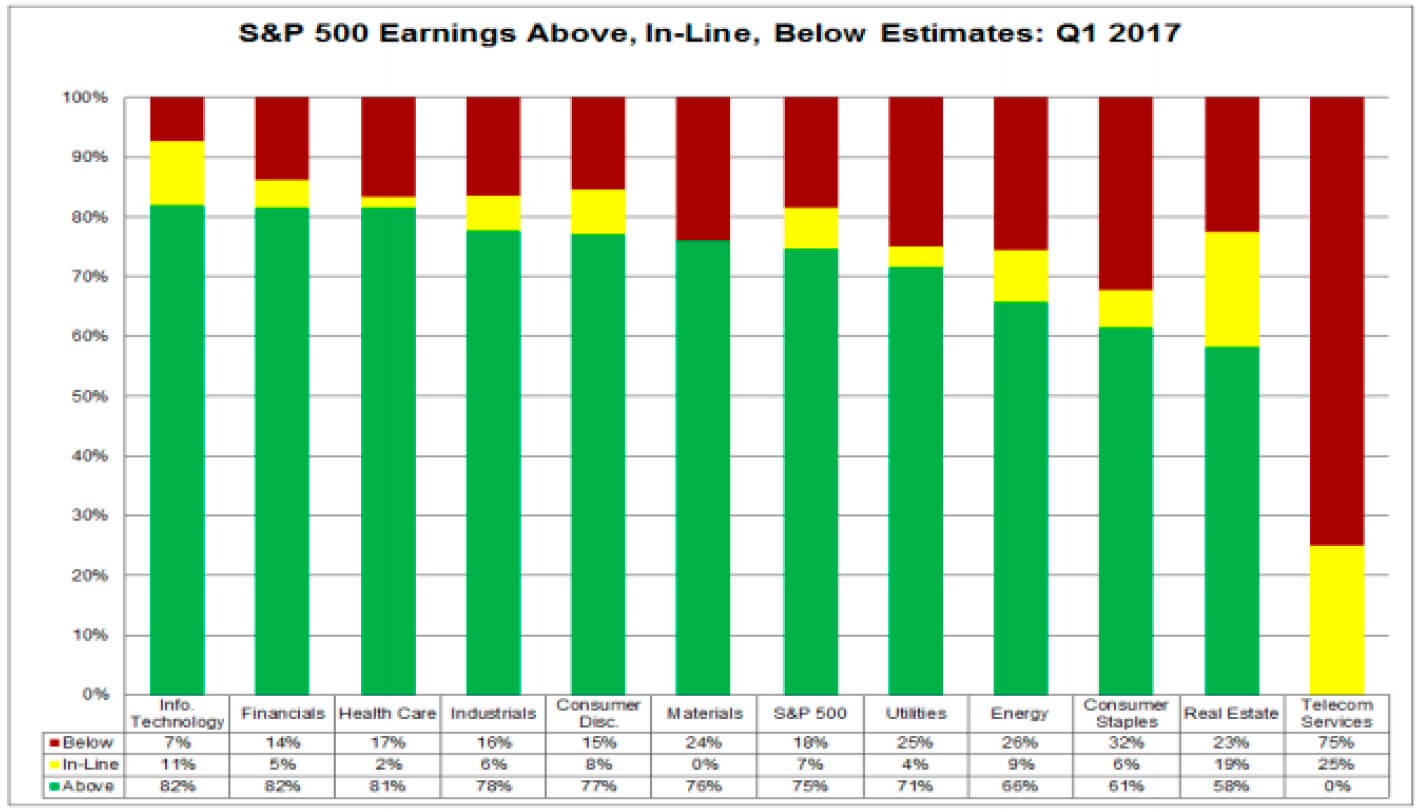 A component of this earnings season can be explained from the heavy downward revision in analyst expectations a year ago. This was due to the large decline in energy prices and their expected reverberations throughout the economy. Even with this low hurdle set from 2016, the U.S. economy is still healthy and vibrant. New applications for U.S. jobless benefits fell in April and the number of Americans on unemployment rolls tumbled to a 28 year low, pointing to rapidly shrinking labour market slack. This tightening labour market is affecting wage growth upwards and helping bring people back into the workforce. This will be important to monitor as wage growth is beneficial to the economy in that it benefits housing demand, credit growth, and broad consumer spending, however, it ultimately has a negative effect on corporate margins which can lead to economic contraction. Rising wage pressures will compel businesses to optimize output relative to labour costs which gives companies incentives to prioritize boosting fixed investment.

First quarter Gross Domestic Product (“GDP”) grew at an annualized pace of 0.5%. This number, at first glance, does not instill confidence. However, the first quarter is seasonally the weakest of the year and completely in line with the historical average. GDP was expected to be low due to an inventories buildup and a contraction in energy and mining fixed investment. These two drags should lift as these sectors begin to reinvest in capital expenditures (“capex”). We have written extensively on the capex decline in the energy sector since 2014. The materials industry has been in the same downward cycle since the commodity markets peaked in 2011. Both sectors should benefit from the recent rally in their underlying resources and provide them with the necessary cash flow to maintain and expand production.

One theme that is beginning to garner more attention in the investment community is cybersecurity. Nearly one million new malware threats are released every day. Ransomware attacks jumped 50% last year, while malware found its way into enterprise networks every 81 seconds in 2015, compared to every six minutes a year earlier. Global cybersecurity is on track to exceed $1 Trillion USD over the next four years as the cost of cyberattacks to the global economy rises to $6 Trillion USD annually by 2021. Soaring costs of cyber crimes (lost productivity, stolen or compromised intellectual property, destroyed counterparty confidence) are forcing companies and governments alike to deploy vast amounts of capital into increasing their cybersecurity platform. It is rumoured that President Trump is on the verge of passing an Executive Order to modernize the government’s legacy Information Technology (“IT”). Previous administrations focused on military defense for this infrastructure. This is proving inadequate because of how decentralized and sophisticated cyberwarfare actors have become. If true, the new defence contractors (and massive U.S. Department of Defense budget) of the 21st century could be headed to Silicon Valley rather than in the names of Boeing, Raytheon, and Northrop Grumman.

We have discussed one of our holdings, Symantec (NYSE:SYMC), a global leader in next generation cybersecurity, in a previous piece. One other firm that is owned by the Caldwell U.S. Dividend Advantage Fund and is becoming a major player in cyber security is Cisco Systems (NYSE:CSCO). CSCO’s focus is moving away from hardware and towards security solutions to protect the digital economy. Safeguards that protect business interests across the entire attack continuum before, during, and after a cyber attack provide the biggest competitive advantage to IT firms today. CSCO now wants to be seen as a star in cybersecurity. It had sales of just over $2 Billion USD (4% of total revenue) in the last four quarters and could grow to $2.5 Billion USD for 2017. Current sales growth in their security division towers over the rest of the company’s segments. CSCO’s security segment sales in the second quarter of 2017 have grown 14% year-overyear (“YoY”) and have been growing at 12% annually for the past twelve quarters, far outpacing U.S. and global GDP growth. One of the major benefits of this business change for CSCO is that it is transitioning from selling hardware to software as a service. CSCO acquired 12 companies in 2016 and six focus on security. 50% of their current security portfolio is delivered in a subscription model and management has indicated that they are working to increase it. This switch is helping to drive both gross and operating margins upwards over 400 and 490 basis points respectively.

We believe that CSCO will be a strong performer in 2017. Cybersecurity is quickly becoming the most important issue in boardrooms across the globe. As companies and governments realize their vulnerability from cyberwarfare, companies who are the vanguard of cybersecurity, like CSCO, will benefit from outsized growth.