December Recap: The Fund gained 0.8% in December versus a gain of 1.7% for the TSX Total Return Index. Top performers in December were Wi-Lan (+22%) and CCL Industries (+13%). Wi-Lan is recovering from an oversold position following a couple of quarters of light revenue. While the contract nature of the business makes for lumpy quarterly results, we are attracted to the cheap optionality on the company’s recently acquired patent portfolios, which are expected to have meaningful revenue contribution going forward. CCL announced another significant acquisition, one that is both highly accretive and transforms the company by adding high-value security technology that can be embedded into CCL’s existing label offerings. No stocks were added to the portfolio in December.

Full Year 2016 Recap: The Fund gained 19.3% in 2016 versus a gain of 21.1% for the TSX Total Return Index. The rebound in commodity prices was a major driver for the Canadian market in 2016 and made Canada one of the best performing markets in the world. The Energy and Materials sectors accounted for a whopping 50% of the Index’s performance – if one strips out the contribution from these sectors, the Index would have only gained 9.2% for the year.

Given that the Fund had very little exposure to Energy or Materials (sectors that exhibit a high degree of volatility), the performance of stocks within the portfolio must have been very strong in order to achieve the Fund’s 19.3% gain. It is for this reason that we are quite pleased with the Fund’s performance in 2016.

In reality, most managers under/(out)-perform the Canadian market in years with strong commodity rallies/ (collapses). We illustrate this in table II. What is clear is that the CCVMF has substantially outperformed its peers and the Index over the last two years of commodity volatility, and we attribute this success to the Fund’s ability to identify and own catalyst-rich stocks that are growing in value. Indeed, analysis of the Fund’s longterm performance shows that security selection (i.e. owning the right stocks), has added 8% of out-performance versus the Index, on average, in each of the last 5 calendar years. 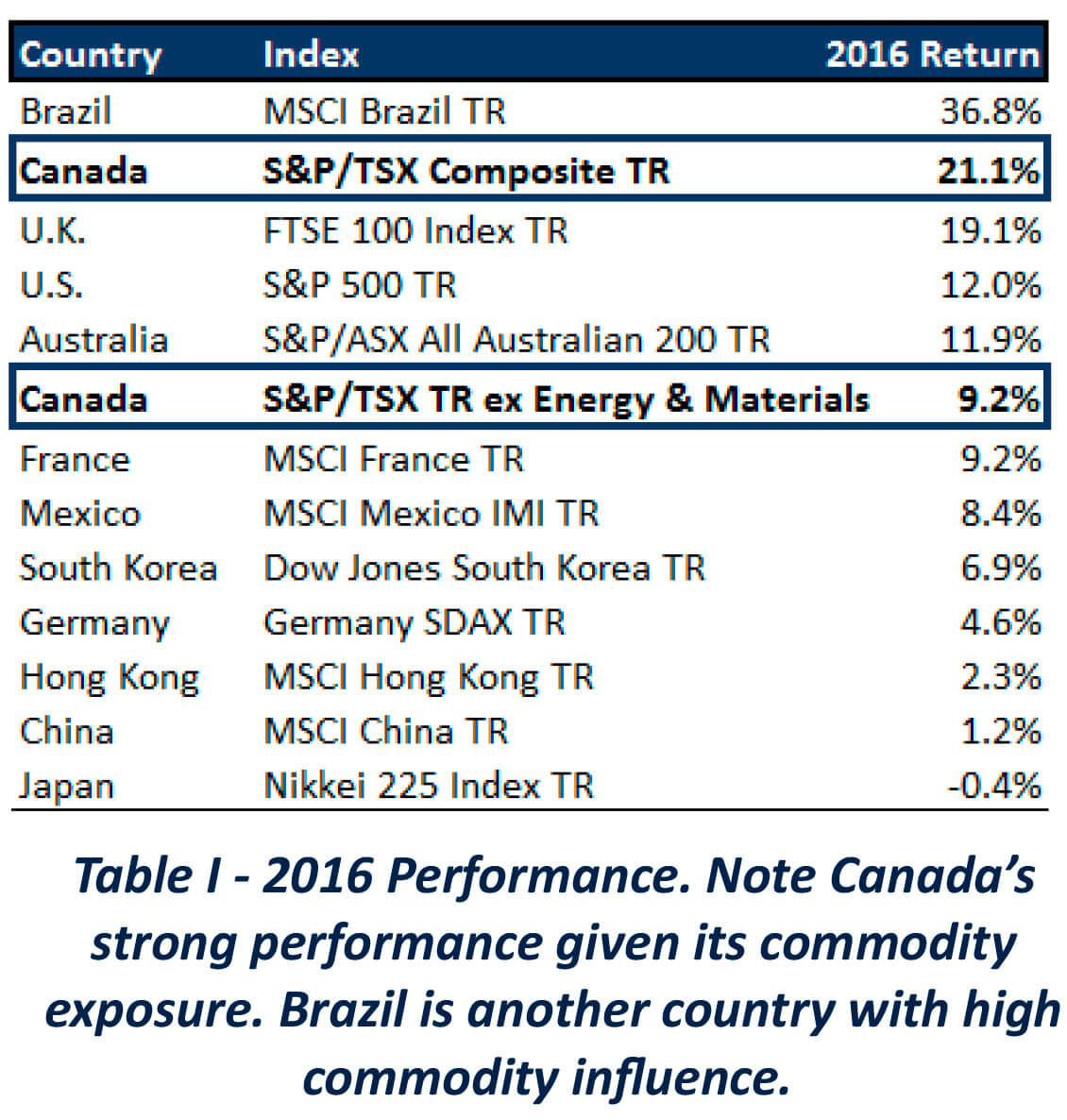 The investment process used to uncover catalyst-rich stocks starts with a quantitative screening of all the stocks in Canada. This daily process produces buy and sell signals that are then vetted through a due-diligence process, something we call the active overlay. We noted in our last several commentaries that we have been busy vetting stocks that have hit the Fund’s buy signals. The market’s rotation into Energy and Materials made for a somewhat challenging environment – in addition to producing a high amount of buy signals, many of the buy signals were simply a function of higher commodity prices, which fail to meet our criteria that a company have sustainable drivers that can continue creating value for shareholders. The CCVMF’s portfolio management team ultimately decided to pass on 32 stocks. These decisions have added value to the CCVMF thus far, as these stocks have underperformed the market by 1.3%, on average (-5.2% if you exclude one very strong performer). We believe it is the active overlay that has allowed the CCVMF to significantly out-perform similar investment strategies in Canada. 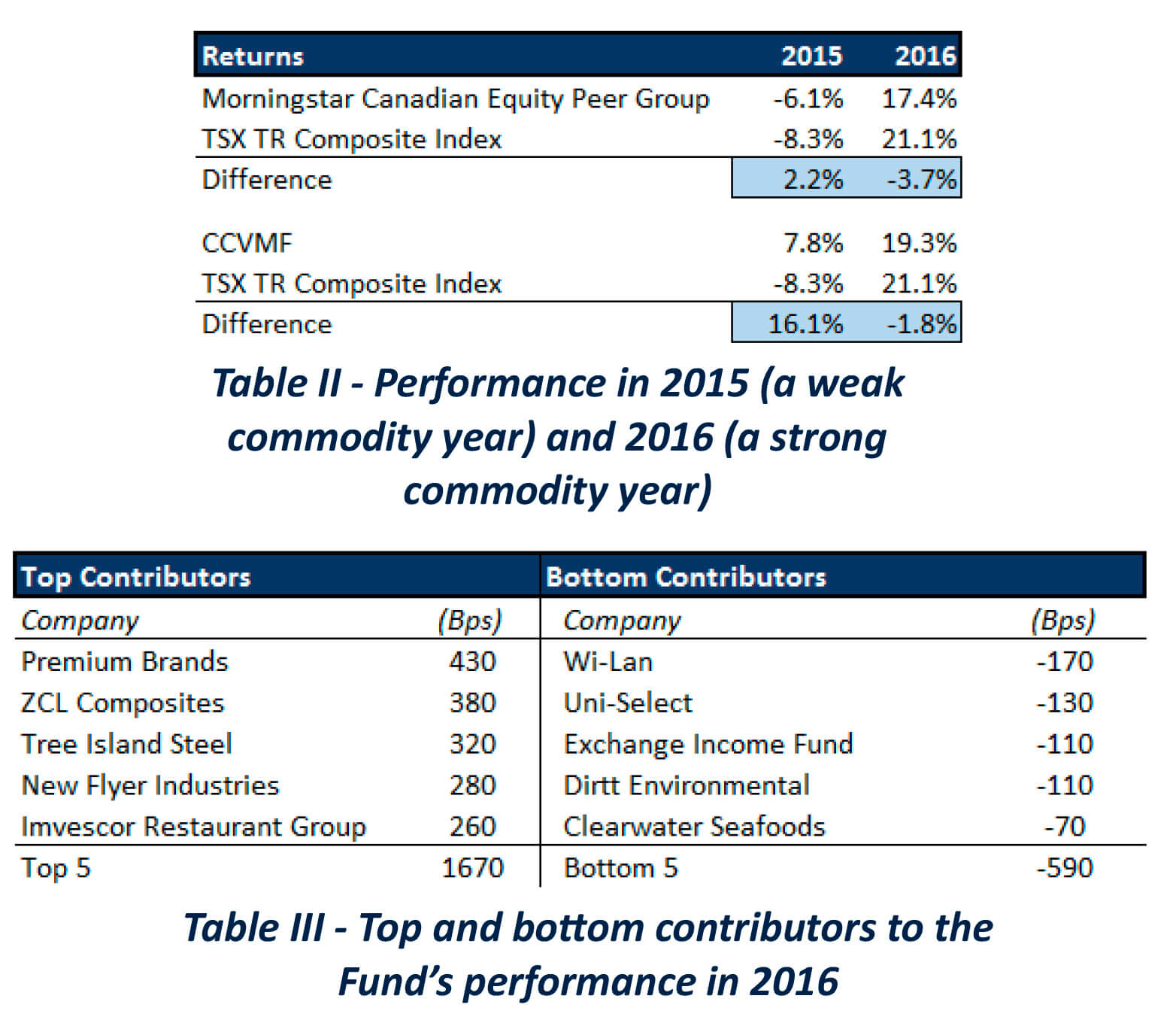 2016 was a milestone year for the CCVMF as the Fund celebrated its first 5 years! While the CCVMF has performed very well thus far (a $50,000 investment when the Fund launched would be worth $90,070 at the end of December, versus $70,321 invested in the Index), we continue to see a strong set of catalysts to drive continued growth. The quantitative screening process continually highlights new opportunities and one metric we look at is how much the portfolio looks different at the beginning of each year versus the prior year. Starting 2017, there are only 7 holdings that overlap from the start of 2016, just one reason that we look to the future of the Fund with great optimism.

Wishing you and all of our investors continued success,
The CCVMF Team