The U.S. was a stalwart among its global peers as the S&P 500 reached record highs. The Federal Reserve (“The Fed”) kept rates on hold but made certain in their language and tone that an increase of the federal funds rate in March is 100% priced into the futures market. With the U.S. economy approaching full employment and inflation moving gradually toward its target, the risks to the Fed’s outlook seem close to balanced. In early November, just prior to the U.S. election, money markets were still only discounting one rate hike before the end of 2017. Now the market has priced in three increases for 2017. While inflation expectations have risen significantly in the past year, core inflation is still below the 2% target. If the economy does slow or show signs of weakness it should be expected that the Fed will back off its hawkish tone much like it did in the early 2016 when energy markets and a rising U.S. Dollar (“USD”) were wreaking havoc on the economy. The tone and content of President Trump’s first annual address to Congress also appeared to help ease financial conditions, with the prospect of tax cuts, a roll-back of regulations and greater infrastructure spending to help push the economic growth back to pre-2008 levels. The ball is now firmly in the Republicans court to execute on their lofty goals.

What’s next for oil? At first glance, the market seems stretched. Oil supplies in the U.S. have moved to new five year highs and the rig count is at its highest level in over twelve months. Normally, increasing production and an inventory build would cause the market to panic. However, this market is far from normal. Just prior to the OPEC production cut, member countries pumped heavily for export before the cap on production was put in place. This oil was put on tankers and shipped across the Atlantic which typically takes between 50 and 60 days and arrived in the early part of 2017. The impact of OPEC’s deal to cut total oil production by 1.8 Million barrels per day (1.2 MMBD from OPEC and 600MBD from non-OPEC) should flow through to U.S. inventories by the summer and result in a 500k-750k per a day draw. Murmurs out of OPEC suggest that they are not pleased with price reaction to their production cuts and further action could be coming. Initially, WTI reached levels of over $54 a barrel on the announcement of the initial cuts. This spike presented an opportunity to U.S. drillers who in many areas of the U.S. are profitable at $30 a barrel. For shale drillers, “break-even” typically means operating costs plus a 10% to 15% return. In areas of the Permian basin in Texas, exploration and producers like Pioneer Natural Resources (NYSE:PXD) are profitable in sub U.S. $30 oil. This spike in price was an opportunity for them to lock in profitable production for 2017. Pioneer recently closed a $435 million acquisition of drilling rights across 28,000 acres in the Permian region from Devon Energy Corp. in mid 2016. When the transaction was announced in June, Pioneer said wells drilled in the acquired assets will generate returns of 50% or more. Shale producers are now the global marginal supply in the oil market. When prices spike, they have the ability to quickly turn on production with minimal investment compared to other large oil deposits around the world. We see the recent weakness due to hedging of producers, seasonal inventories and a timing mismatch between a U.S. production ramp up and OPEC cuts. Longer term, the price of oil will most likely be range bound as costly projects unwind from lack of investment and cheaper alternatives like domestic U.S. domestic production step in to fill the void.

Increasing reliance on domestic energy production appears to be a priority for President Trump’s administration. Recent approval of the XL Pipeline through the interior of the U.S. is testament to this. After all, Mr. Trump campaigned hard on bringing jobs to the American and oil related capital spending and job creation between 2012 and the first half of 2014 was substantial.

This is important because according to the U.S. Bureau of Economic Analysis, oil and gas extraction has been studied to have a job multiplier (employment multipliers are the number of jobs effected by a change in employment for the base industry) of 6.9. The oil and gas extraction sector has the largest multiplier of any industry in the U.S. Expect further approval in this area as the Federal Energy Regulatory Commission (“FERC”) continues to approve new pipeline projects throughout the U.S. Removing regulation in this space should give President Trump the biggest “bang for his buck” as his administration focuses on improving labour opportunities for the middle class.

President Trump’s focus to “Make America Great Again” is positive for the American railroad sector. This group has historically moved in value with the fortunes of the American economy and appears to be clear winners from Washington’s reforms to tax policy and increasing domestic production. We have a constructive outlook on the retail sector because of the industry’s unique characteristics: 1) Limited and rational competition 2) High barriers to entry and 3) Sustainable demand. One railroad we particularly like is Union Pacific (NYSE: UNP). UNP railroad network consists of 32,000 route miles through 23 states in the western U.S. supporting a balance mix of six strong business groups (Agriculture, Intermodal, Automotive, Chemicals, Industrial Products and Coal). UNP has the largest, most diverse network of railroad west of the Mississippi. It has unparalleled access to Gulf of Mexico and western U.S. ports along with the industries best access to Mexico. 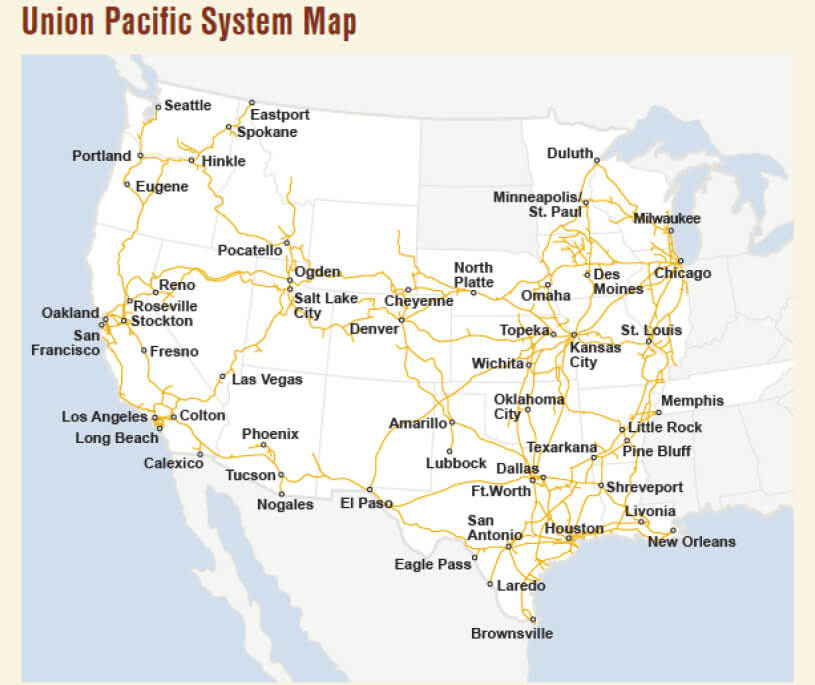 UNP has been laser focused on improving its operating ratio (operating expenses/net sales). This ratio has dropped from of 67.8% in 2012 to 62.0% in 2016’s fourth quarter and management has stated that their operational goal is to get this to 55% in the long term. Operational efficiency will drive free cash flow and along with UNP’s clean balance sheet will enable track expansion and service improvements. This will drive real rate increases and margin expansion throughout time that UNP will focus on growing its dividends and share repurchases.

We believe that UNP will be a strong performer in 2017. Increased domestic economic production and tax reform should drive growth and margin expansion in the railroad industry. Fundamentals support that the industrial sector will be a beneficiary of the proposed tax reforms and economic policies of Washington.