It has now been one year since the election of President Trump and what a long, strange trip it has been. To say that the performance of financial assets over the last twelve months has exceeded expectations would be a gross understatement. The S&P500 has added close to 450 points and well over $2 trillion of market value to its underlying companies. Markets initially soared after the election on hopes of tax reform but have been propelled by excellent corporate earnings from synchronized global growth. The market has shrugged off the political uncertainty of populism in Washington and focused on the backdrop of low inflation, cheap money and strong profits.

Low U.S. inflation has given the Federal Reserve (“The Fed”) the ability to keep interest rates low and lower unemployment. The Fed has surprised itself at the duration of prolonged low rates. Over the last few years, Fed members have made predictions on the future path of interest rates and have been way off. Luckily, this current Fed has been data dependent and has opted to keep rates low than stubbornly follow through on its forecasts.

Historically inflation tends to be a lagging indicator, often not peaking until well into a recession. Currently housing and energy prices (as represented by the S&P/Case Schiller National Home Price Index and the Consumer Price Index for All Urban Consumers: Energy) are up 6.1% and 6.4% respectively in the last twelve months. These should both work their way into inflation numbers giving the Fed ammunition to raise interest rates in 2018. The Fed will most likely be cautious and wait for U.S. inflation to be above 2.0% for a sustained period of time before acting. However, it appears inflation is coming nonetheless. Until then, the U.S. economy is healthy, growing and on a footing of accommodative monetary policy. The managers of the Fund still favour cyclical sectors of the economy over defensive in this environment, but are monitoring inflation as a bellwether for global equity markets.

The North American Free Trade Agreement (“NAFTA”) is in the process of being renegotiated by all three parties with little progress being made. The White House is pushing hard for reforms to NAFTA in manufacturing, especially auto production . The U.S. is asking for automobiles to have 85% North American parts in every North American made car, up from 62.5%. The White House also wants 50% of all cars produced under NAFTA built in the U.S. Both of these demands align with President Trump’s voter base in Midwestern states. The U.S. wants to reverse the trend of high tech Asian parts (and jobs) making their way into North American auto production. This congress between Mexico, Canada and the U.S. is far from over. Ultimately, NAFTA has been a real winner for all three nations but certain regions have been economically hurt. Concessions from Mexico and Canada should come to maintain the agreement. Until then expect to see heightened volatility in the Canadian Dollar, since the U.S. is by far Canada’s largest trading partner and any disruption on trade will be initially viewed as negative. This sell-off will most likely be temporary as Canada is a net importer of manufacturing and a major exporter of energy to the U.S. which should stabilize the exchange rate.

The Organization of the Petroleum Exporting Countries (“OPEC”) and Russia are set to meet at the end of the month. The organization is set to discuss extending the current production cuts for another nine months. Saudi Arabia appears to be in favour of this extension as it prepares to sell off a part of its national oil company, Saudi Aramco. The Saudi Kingdom wants to use the proceeds from the sale to invest in public infrastructure to help diversify its economy away from oil production. The wild card is Russia. They are viewed to be in no rush to extend cuts, rather see how current cuts play out. Recent Saudi-Russia relations indicate that the Russians will support their Saudi friends but is not official.

Managers of the Fund at Caldwell Investment Management believe that the energy sector will be a strong performer in 2018. WTI prices holding firmly above $50 is a major turning point for the financial health of exploration and production companies. One company in particular that will benefit from this increase in WTI is Occidental Petroleum (NYSE:OXY). Occidental is U.S. based exploration and production company. OXY is the largest operator in the Permian Basin, producing over 300,000 barrels of oil equivalent (“boe”) in the region (OXY produced 633,000 boe in Q3 2017). OXY is set to increase the number of wells it has in the Permian Basin to 44 from 28 in Q4 2017. These wells are in some of the best strategic zones of the Basin and expected to yield 20-30% more boe than peers. OXY has been laser focused on costs, driving down operating expenses per boe to $8.14 a barrel which is a decrease of 37% since 2014. 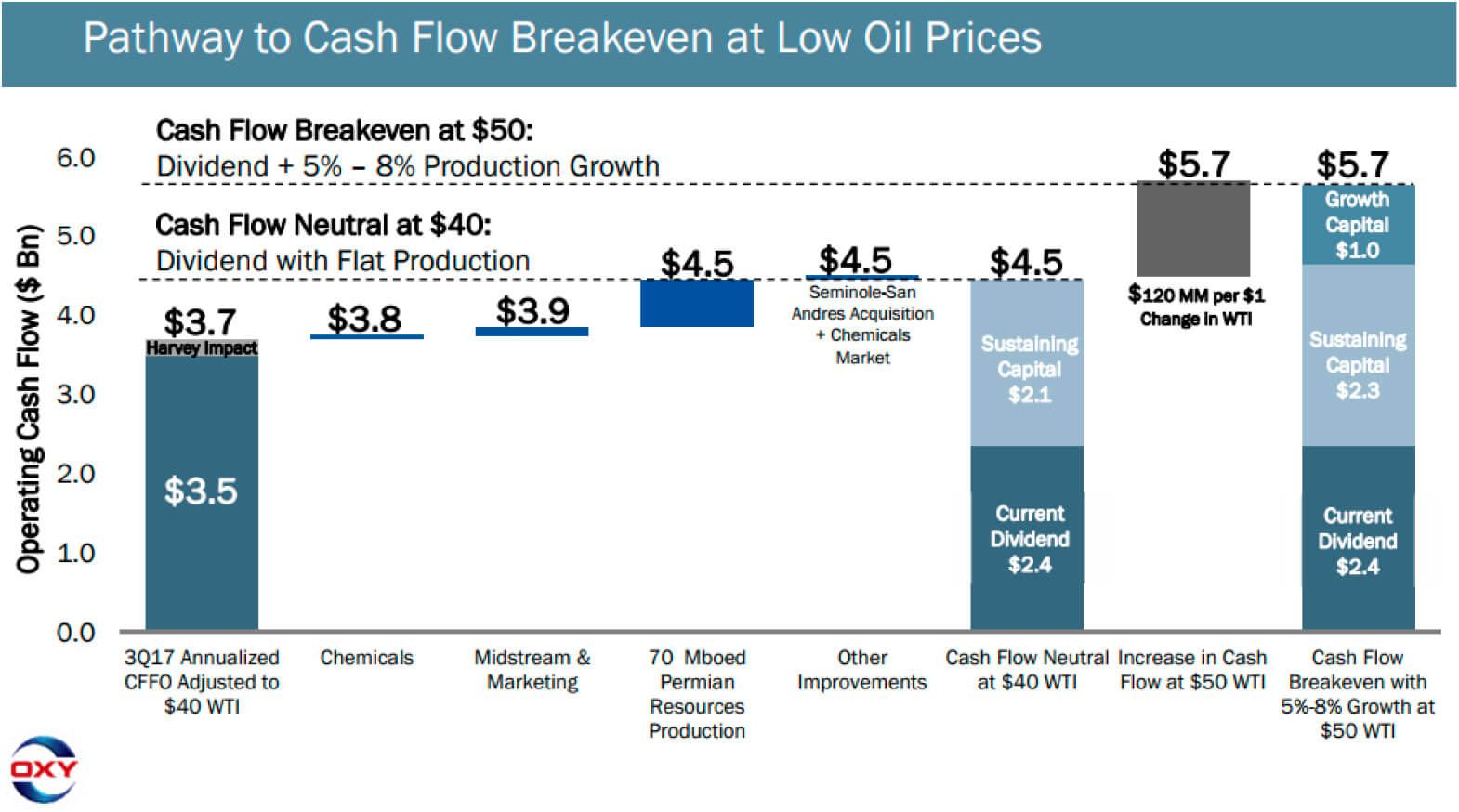 Coming through the last three years of pain in the oil sector has made OXY into an incredibly efficient operator. Currently OXY is well on its way to being cash flow neutral at $40 a barrel (dividend with flat production). At $50 a barrel, management expects that production can grow between 5-8%. Now that the U.S. has allowed for the exportation of domestic oil, OXY is one of the few companies in the U.S. with a clear path to growing production with internally generated cash flow.

We believe that energy stocks such as OXY will be a strong performer in 2017 and 2018. We believe U.S. dividend-paying equity securities that possess a combination of low volatility and high profitability will significantly and disproportionately benefit from the continued U.S. economic expansion.

The opinions, estimates and projections contained herein are those of the author as of the date hereof and are subject to change without notice. The author makes every effort to ensure that the contents herein have been compiled or derived from sources believed reliable and contain information and opinions, which are accurate and complete. However, the author makes no representation or warranty, express or implied, in respect thereof, takes no responsibility for any errors and omissions which may be contained herein and accepts no liability whatsoever for any loss arising from any use of or reliance on this report or its contents. Information may be available to the author, which is not reflected herein. This report is for information and discussion purposes only and must not be construed as an offer to sell, or solicitation for, or an offer to buy, any securities. This report should not be considered as investment advice or a recommendation of any particular security, strategy or investment product. Information presented herein, is obtained from sources we believe reliable, but we assume no responsibility for information provided to US from third parties. Caldwell Investment Management Ltd. and Caldwell Securities Ltd. are wholly-owned subsidiaries of Caldwell Financial Ltd. Officers, Directors and employees of Caldwell Financial Ltd. and its subsidiaries may have positions in the securities mentioned herein and may make purchases and/or sales from time to time.

The Fund may or may not continue to own the securities referenced herein and, if such securities are owned, no representation is being made that such securities will continue to be held. Investing in the Fund is subject to risks as further described in the Fund’s public disclosure documents, including the Fund’s prospectus. No part of this material may be reproduced in any form, or referred to in any other publication, without the author’s express written permission.