The Federal Reserve (“The Fed”) released its Beige Book earlier in the month. The United States (“U.S.”) economy continues to improve as economic activity expanded at a moderate pace across all districts in July and August. The report painted a good picture of U.S. economic health, as consumer spending increased in most districts, with the only dark spot being retail auto sales which has slowed. Residential real estate, weighed by low inventories of homes, continues to improve. The mix of low unemployment and low interest rates should keep this sector improving even into the fall and winter which typically slow down for the sector. The Fed views the labour market as tight, with reports of worker shortages in manufacturing and construction. This is especially good for the middle class who get the majority of their income from wages and create strong support for domestic consumption which accounts for 70% of U.S. Gross Domestic Product (“GDP”). Stronger growth in a tight economy is inflationary and monetary dynamics confirm this risk. The U.S. velocity of money has picked up meaningfully and should help inflation gather steam later in the year. Hurricane Harvey caused broad disruptions to Atlanta and Dallas districts along the coast and caused many firms to close due to flooding. Due to the effects of Harvey, a fifth of oil and natural gas production is temporarily offline. A shutdown in production will help reduce oil and gasoline inventories that have weighed on energy prices for the past two years. Overall the U.S. economy is doing well and should provide strong enough economic conditions for the Fed to continue its desired four rate hikes by the end of 2018.

China’s Communist Party will hold its 19th National Party Congress on October 18th-25th , 2017. The five-year congress serves to rotate personnel according to promotion and retirement of communist party officials. This is a critical leadership reshuffle in the high ranks of the Chinese Communist Party and government, and will also mark the half way point of General Secretary Xi Jinping’ terms in office. Investors around the globe will watch intently as slight changes in the political trajectory of the world’s second largest economy can have major implications for markets. It is expected that Xi Jinping is attempting to promote many of his supporters into important positions after having spent the last five years consolidating his position so that he can now advance and implement his political agendas further. This is important because China is pivoting from an export led economy to a consumption led one. In order to maintain social order, Xi has focused on reducing pollution, social and physical infrastructure, and strengthening the military.

The One Belt One Road Initiative by the Xi government has focused building infrastructure throughout the northern and western provinces along with Chinese trading partners. The Belt and Road Initiative is expected to bridge the ‘infrastructure gap’ and thus accelerate economic growth across the Asia Pacific area and Central and Eastern Europe. This will strengthen China’s economic power in Asia and reduce American military power in the region. Due to this, China is by far the most important consumer of commodities in the world as seen in the chart below. Outcomes from the 19th party congress will have long term effects on raw material markets which we will monitor closely. 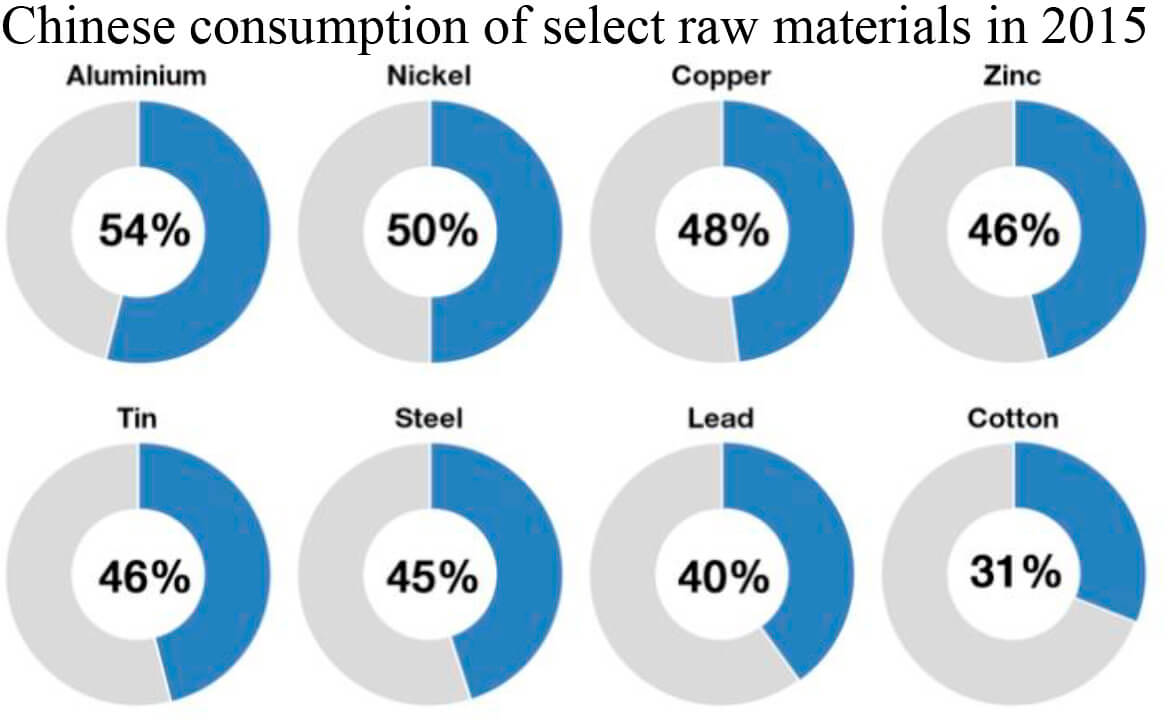 Global oil demand is climbing in 2017. The International Energy Agency (“IEA”), which advises most G-20 economies on energy policy, recently raised its forecast that global oil consumption will rise by 1.6 million barrels per day. Global energy markets continue to rebalance with OPEC supplies falling for the first time in five months and inventories of refined fuels in developed nations falling toward average levels. Combined with the effects of Hurricane Harvey this should provide a strong environment for energy in the back half of 2017.

In Canada, the Federal government has proposed changes to taxes for Canadian controlled private corporations (“CCPC’s”) titled “Tax Fairness for the Middle Class”. The concern is that many upper middle and upper class Canadians are not paying enough in taxes through loopholes and “income sprinkling” (a process where the corporation pays out money to family members taxed at a lower marginal rate). These measures have been met with considerable push back as CCPC’s far eclipse the bourgeoisie of the Canadian population. CCPC’s the favoured tax entity of small business within Canada and provides safety nets (e.g. maternity, sick leave, pensions) for people taking risk in the economy and provide a tax advantaged shelter to save funds earned in the business to use for expansion. Simply put, small business is the backbone of the Canadian economy and changing the CCPC could have far reaching consequences. Specifically, these will negatively incentive citizens to take risk and work in the private sector. This will lead to lower economic growth as both labour and capital move to lower taxed jurisdictions, lower fixed capital investment, lower job creation, and lower taxes paid. This comes at a time when the largest province in Canada, Ontario, has moved its marginal tax rate from 48% to 54% in the last decade and electricity prices are poised to increase dramatically over the next five years. The Trudeau government is debating these changes and will give more clarity in early to mid-November 2017. There is still time for this government to walk back these proposals.

The managers added a new position to the Fund, Automatic Data Processing (NASDAQ:ADP). ADP provides business outsourcing solutions including payroll, benefits administration, human resource management, and compliance to name a few. ADP is a high quality business with predictable cash flow and growth. ADP has seen revenue growth of 6.0 % in 2017 which should improve as U.S. economics and labour force participation improve.

ADP is currently improving the company competitive positioning by investing heavily in research and development to broaden their platform for clients. This gives the company considerable runway to expand current business with existing clients and provide a platform to newer, more tech savvy businesses. ADP has a very sticky client base because of how engrained they are in firm’s payroll and benefits management functions. New firms are less likely to invest in finance operations and prefer to outsource until they hit significant scale to warrant it. ADP’s upgrade of strategic platforms is bridging the gap between older bricks-and-mortar business and virtual office of the 21st century. This has been working as seen in operational margins that have increased by 600 basis points since ADP began to branch out towards a more progressive system.

We believe that technology stocks such as ADP will be a strong performer in 2017 and beyond. Fundamentals continue to support the view that the U.S. labour market continues to improve in the U.S. Economy. We believe U.S. dividend-paying equity securities that possess a combination of low volatility and high profitability will significantly and disproportionately benefit from the continued U.S. economic expansion.