After a string of stronger economic data in January, the U.S. economy lapsed into the old sluggish growth pattern again, according February data. More importantly, U.S. January retail sales and personal income were revised sharply lower. The downward revisions to economic data and the unsettling nature of the global economy prompted Federal Reserve Chair Janet Yellen to tone down future interest rate hike probabilities (to calm financial markets). It also helped to rein in the rising U.S. dollar, especially against Emerging Market currencies. Countries like Turkey, Brazil, South Africa and Indonesia have been financing their economic expansion in the past several years by externally-held U.S. dollar denominated debt. A strong U.S. dollar will increase their debt burden in local currency terms. This represents a global risk that Janet Yellen has come to recognize. As for Canada, the overall picture ranges from mixed at best, to contraction. For the month of February, Canadian exports tumbled 5.4%, imports fell 2.6% (certainly a concern for domestic demand and export growth); and manufacturing sales fell 3.3%. The March employment report was mixed with many volatile components that need confirmation.

Since our last update, the softer U.S. economic performance and tame inflation are supportive for bonds. – Inflation momentum weakened in February. U.S. core Personal Consumption Expenditure (PCE) Price Deflator rose by only 0.1%, bringing the year-over-year rate to 1.7%. – Personal Spending was also soft; advancing only 0.1% in February, but the disappointment was in the downward revision of the 0.5% growth in January to a 0.1% gain. Personal Income rose 0.2% in February, but mostly driven by rental income and government (social security) transfers. – Wage Income growth, the most important driver of inflation, actually fell 0.1%. As a result the savings rate rose to 5.4%, not exactly conducive to strong growth in consumption. The March U.S. employment report was also mixed, but ‘average weekly hours’ was stuck at a lowly 34.4 hours, hardly putting any pressure on future hiring needs. – The Federal Reserve’s Labour Market Conditions Index came in at -2.1 in March, after the February reading of -2.5 (which was the lowest level since July 2009). – U.S. Corporate Profits fell again for the third straight quarter (from the U.S. 2015 Q4 Gross Domestic Product (GDP) report. It has fallen four out of the last five quarters (since Q3 2014). Corporate Profits in Q4 2015 are 12.5% below Q3 2014. – Capital investment remains a problem area. U.S. Core durable goods orders (nondefence excluding aircrafts, the best proxy for business capital spending) fell 1.8% in February – U.S. February imports rose by 1.3% and exports rose by 1.0%. It is a welcome recovery for global trade that has been shrinking for a while, but of course we need more data for confirmation. – Canadian January GDP gained 1.5% on a year-over-year basis, but there is much volatility inside the numbers, which is not unusual for Statcan. Again, we need more data for confirmation.

Citing global concerns, the Federal Reserve Open Market Committee (“FOMC”) passed on raising the Fed funds rate in their March 15-16 meeting when they had the strong January data in front of them. Now that those January numbers have been revised downward rather significantly, and that February numbers were unspectacular, the hurdle is very high for the FOMC to raise interest rates again. They might feel compelled to move by June or July for one quarter point, with the U.S. election right on the horizon, but that should be the extent of it. The retreat by the Federal Reserve from committed interest rate hikes has weakened the U.S. dollar in the foreign exchange markets. The most acute example is the fall in the U.S. dollar versus the Japanese Yen to levels not seen since September 2014. A rally in the Yen is a headwind for risk assets as Japanese institutional investors are heavily invested in foreign markets. The recent rally in the Japanese Yen could trigger paper losses when these foreign assets are marked-to-market in Yen terms, inserting an incentive to liquidate them. On April 13, in Canada, the central bank put policy moves on hold. Bank of Canada Governor Poloz correctly sounded caution to strength in recent data. He was also concerned about the lag in negative effects on capital expenditure from the oil patch. By trying to help, central banks have inadvertently created more volatility through their ‘forward guidance’ and often convoluted communication. As active managers, we at Caldwell are not adverse to volatility and uncertainty. It is in these environments that our indepth analysis and well-thought out strategies really shine, making it easier for us to differentiate ourselves. We strive to generate Alpha – the absolute return one can get through active management of an investment portfolio, and also to better protect our clients’ capital.

The “Natural Boundaries of Interest Rates” should remain stable, with a bias to shift lower. If the recent trend of weaker economic data persists, U.S. and global growth prospects are not strong enough to set the stage for an economic recovery in Canada. The “Natural Boundaries” of the Government of Canada’s 10-year bond yield should be 0.50% to 2.50%, with potential to shift lower. 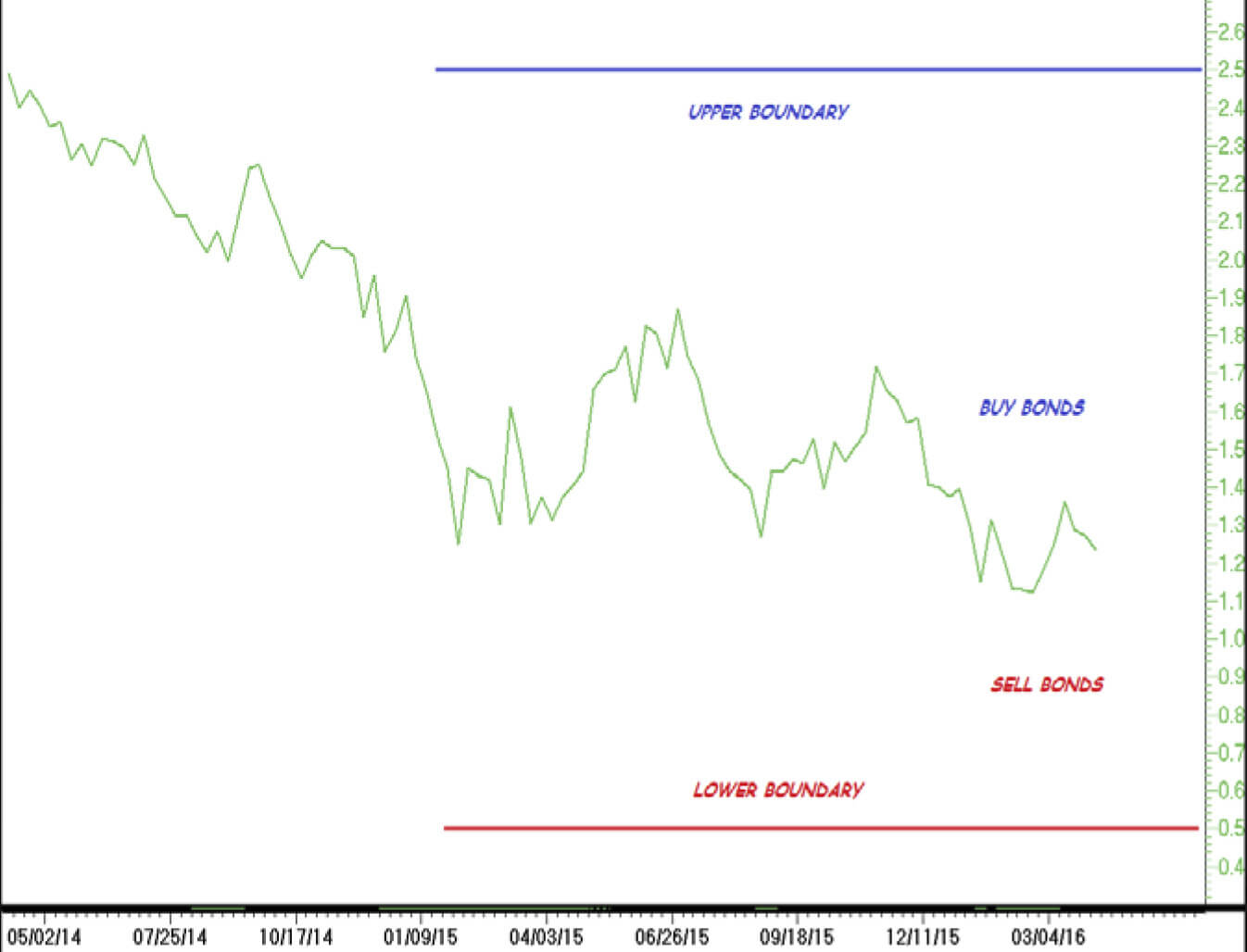 The macroeconomic backdrop has turned more bullish for government bonds. We will be looking for buy signals from technical analysis to accumulate Government of Canada bonds within the context of the “Natural Boundaries of Interest Rates” (chart above) in anticipation of bond yields to fall/bond prices to rise, we are looking for capital gains when bond yields fall towards the lower boundary by dominant macroeconomic forces.