Trump’s victory and the now Republican-controlled Congress raised the possibilities of pushing through Trump’s agenda, including his large fiscal spending plans that will have to be funded by larger deficits and government borrowing.

Trump has projected US$550 billion in infrastructure spending (reportedly over the next 10 years). Applying a ‘fiscal multiplier’ of 1.5 times, that would equate to 0.4% in GDP per year. The 0.4% rise in the U.S. 10-year yield since the election is largely a result of pricing that in. Given a capacity utilization rate of only 75.3% in the U.S., there is enough excess capacity in the economy to absorb those activities without causing inflation to rise.

The market therefore has priced in the worst case scenario for bonds, and from here on any shortfall or uncertainty on Trump’s fiscal spending plans should help bonds. He might even face resistance from factions within the Republican Party who are opposed to higher deficits.

The higher U.S. bond yields also send the U.S. dollar soaring in the currency markets. Trump’s anti-trade stance is not lost in currency markets. Emerging Market currencies, most notably the Mexican Peso, are under tremendous pressure. This development takes away the prospect of lowering interest rates by the respective central bank to help their economies.

Emerging Markets have large amounts of U.S. Dollar-denominated debt; falling domestic currencies increase the debt load and the likelihood of default. An unsettled global economy with the risk rising among Emerging Markets could well precede the passage of expected fiscal spending, which could take months to implement, likely well into 2017.

Government of Canada bonds got caught up in the process but the ‘new information’ from the election is largely a U.S. phenomenon. As such Canada bond yields should remain relatively low even if U.S. bond yields rise. Of course, U.S. bonds are always in the driver seat, but Canada bonds should then slowly outperform their U.S. counterparts. The result will be a widening in the difference between the two bond yield curves, with Canada yields stay progressively lower than U.S. yields.

So, if U.S. Treasuries have priced in the worst case scenario for bonds, due to a shift in growth and inflation expectations that are vastly different from current realities, Government of Canada bonds offer great value here.

Our “Natural Boundaries of Interest Rates”

Macroeconomic research for Canada has the fair value of the Canada 10-year bond yield at 1.00%, given low inflation and economic challenges that are now openly admitted by the Bank of Canada. The “Natural Boundaries of Interest Rates” are therefore 0.00% to 2.00% based on historical dispersions. We understand the lower boundary of 0.00% may be more theoretical, but the upper boundary of 2.00% is very realistic. Various indicators of the Canadian economy continue to project weakness going forward. The Bank of Canada has also articulated the rising possibility of monetary stimulus.

We held defensive positions into the election. The higher bond yields now offer great value for us to deploy the defensive cash components.

We will be looking for ‘buy signals’ from technical analysis to accumulate Government of Canada bonds within the context of the “Natural Boundaries of Interest Rates” (chart below). We anticipate bond yields to fall/bond prices to rise, and are looking for capital gains when bond yields fall back towards fair value, or even towards the lower boundary by dominant macroeconomic forces. Of course, we will keep a vigilant eye on on-going developments. 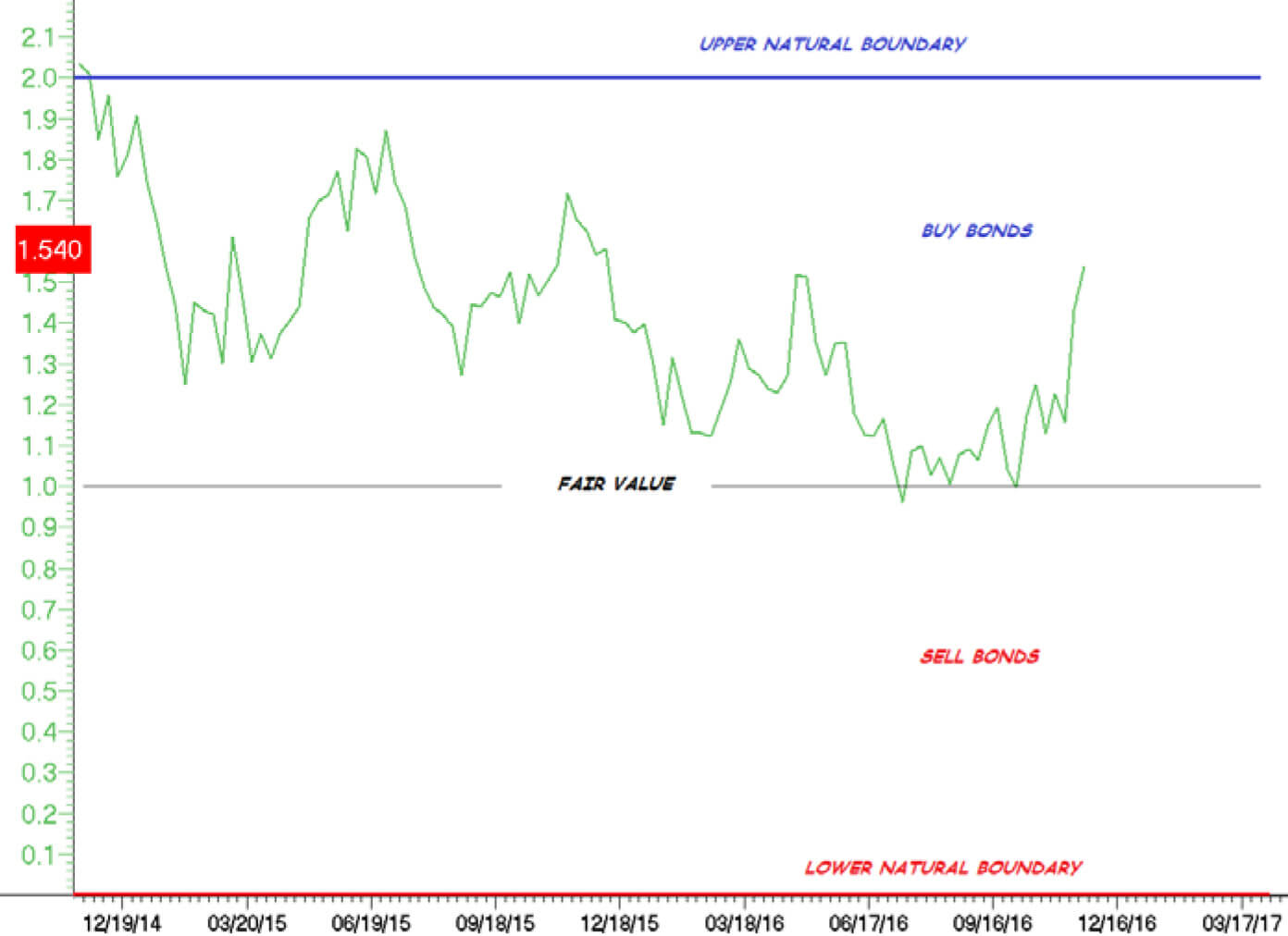