April & May Recap: The CCVMF declined -0.5% in April and gained 3.8% in May versus gains of 3.7% and 1.0%, respectively for the TSX Total Return Index (“Index”). As we look at the performance of the Canadian market in 2016, its a good time to shed some light on how difficult Canada is for individual investors as a ‘home’ market. Canadian news outlets have recently been reporting that investor confidence has roared back and that we are now in a bull market. A key detail that is often omitted from these recent reports, however, is that the majority of Canada’s market return has been driven by a strong rebound in commodity prices; specifically, gold, metals and energy. Given Canada’s relatively high exposure to these commodities, Canada is one of the best performing markets in the world in 2016. Per the chart below, returns in countries less exposed to commodities have not fared so well. 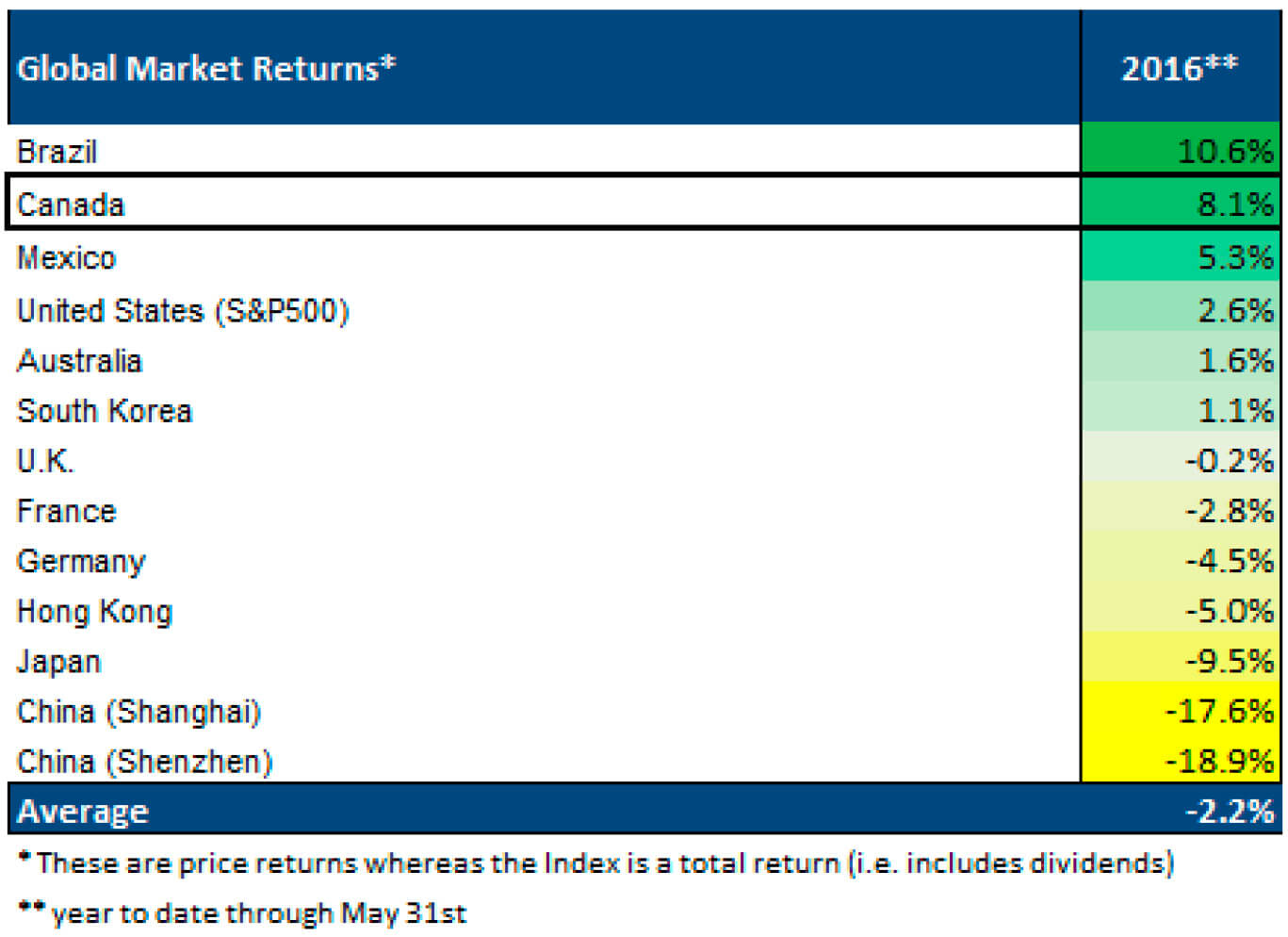 To give investors perspective on how significantly these two sectors are impacting the Canadian market, we note that nearly 75% of the Canadian market’s return this year is driven by Energy and Materials. This means that, excluding Energy and Materials, the Canadian market would only be up 2.0% – hardly a number that suggests confidence has roared back. This is why Canada is a difficult home market. Commodities, by nature, are very cyclical and experience abrupt and sharp moves in both directions. Sentiment often plays a significant role. This volatility distorts underlying market returns and introduces an emotional roller coaster that is not as pronounced in less commodity-heavy countries.

As far as investment strategies go, we feel much better about investing in companies where management teams have control over the company’s ability to grow in value. This is not the case for most energy and materials companies as management has no control over the primary driver of value: the commodity price. Turning back to the CCVMF, we are quite encouraged by the Fund’s performance this year given it has managed to gain 8.7% through May with virtually no commodity exposure. This is well above the market’s 2% ex-Energy and Materials return and is a testament to the CCVMF’s ability to uncover and own companies that are undergoing a positive re-rating by the market.

Top performers in April were New Flyer Industries (+10.7%) and Clearwater Seafood (+8.4%). New Flyer, also a top performer in March, continued higher as it announced Q1 orders and deliveries that included a particularly strong uptick in new orders and backlog. The company continues to have strong multi-year catalysts and is executing well. There was no particular news driving the strength in Clearwater but the company has significant opportunity through its recent Macduff acquisition.

Top performers in May were Wi-Lan (+27.3%) and IBI Group (+22.1%), both of which were purchased in March and are part of the new crop of investments that we expect to drive continued growth in the portfolio, even after a stellar year of out-performance in 2015. Wi-Lan is reporting strong results and announcing new license agreements as they monetize their growing patent portfolio while IBI Group is moving higher as the company grows its backlog and the discount to peers closes.

Tree Island Steel was added to the portfolio in May. While the company is part of the Materials sector, it is different from those discussed above as it does not extract commodities. The company produces wire products (steel fencing, mesh, barded wire, nails) with an emphasis on higher margin product that has greater resistance to import competition. The product is used in industrial, residential and commercial construction, agriculture and specialty applications. Tree Island has several catalysts working to unlock value, including market share gains, expansion opportunities into new products and geographies, additional cost initiatives and a healthier demand environment.

The Fund ended May with a cash balance of 15%. We look forward to tracking the progress of the portfolio’s holdings as we see a meaningful and diverse set of catalysts to drive continued growth.

Wishing you and all of our investors continued success,
The CCVMF Team