Tell Me Something Good

The COVID-19 crisis has placed a magnifying glass on the fragility of the global economic system. In only a short period of time, borders have been closed to foreign travellers, billions of people have been placed into varying levels of isolation and businesses deemed non-essential have been ordered to close, disrupting economic markets on a global scale. We have seen a dramatic increase in financial market volatility and the speed of the stock market decline has been greater than anything historical. Uncertainty surrounding the near-term economic fallout from this virus continues to mount. However, unprecedented times call for unprecedented measures and we believe the swift actions of global governments, which have been nothing short of historic, will soon re-establish an environment of sustained economic and capital market growth.

Leveraging lessons learned in prior financial and health crises, global governments and policymakers have taken little time to respond to the economic and health threats surrounding COVID-19.

After close to unanimous Congressional support, the U.S. Government passed its fiscal aid package of more than US$2 trillion on Friday, March 27th. At 880 pages long, this is the largest economic relief bill in history. By way of comparison, the Troubled Asset Relief Program, in 2008, more commonly referred to as TARP, was initially authorized for US$700 billion. The Coronavirus Aid, Relief, and Economic Security Act, now known as CARES Act, could amount to more than 10% of the country’s gross domestic product (“GDP”).

Given the traditional gridlock in Washington, the sense of urgency in creating the bill and ultimately passing it should provide much needed comfort. Key highlights from the Act include substantial financial assistance to healthcare and public health measures developed specifically to address the impact of the virus. In addition, the plan includes one-time assistance payments of up to US$1,200 for individuals and US$2,400 for married couples, as well as increased jobless benefits by strengthening unemployment insurance. The Act also provides access to business loans and grants, totalling US$500 billion, designed to help deter businesses from laying-off their employees.

However, the U.S. is not alone in taking drastic action to support their economy. On Wednesday, March 25th, Canada obtained parliamentary approval for a C$107 billion package that includes C$52 billion in direct fiscal stimulus and support for companies and individuals, this is up sharply from the C$27 billion originally introduced. Some of the measures included in the package are delays in student loan repayment, a taxable C$2,000 a month benefit for workers affected by the outbreak, a wage subsidy for small employers and additional assistance to families with children by temporarily boosting Canada Child Benefit payments. Canada’s Mortgage and Housing Corp. has also bolstered the insured mortgage purchase program to C$150 billion from a previously announced C$50 billion. There is also C$55 billion in tax payment deferrals for corporations and individuals until September 2020. The Canadian relief package equates to more than 3% of Canada’s nominal GDP.

More recently, Prime Minister Trudeau announced sweeping measures to further protect Canada’s small businesses. These included enhanced wage subsidies and access to loans through banks and other credit funding intermediaries. Banks are now working directly with the government to offer specified businesses C$40,000 loans, which are fully guaranteed by the Federal government. The wage subsidy has also been increased to 75% for small businesses, up from the original 10% announced.

Outside of these measures, the Bank of Canada (“BOC”) has lowered its key interest rate by 150 basis points over the month of March. Canada’s overnight lending rate is now only 0.25%. The BOC has also announced plans to acquire commercial paper and government securities. These programs have been launched to help alleviate any strain in the short-term funding markets, thus preserving a key source of funding for Canadian businesses.

In Europe, the European Central Bank (“ECB”) has increased its existing asset-purchase program, which now includes Greece in the portfolio of bonds purchased, to 1.1 trillion euros annually. The ECB has also eliminated a cap on how many bonds it is able to buy from any single Eurozone country. A suspension of limits on European Union government borrowing has also been enacted. In order to maintain liquidity and access to funding, the ECB has cut interest rates on its Targeted Long-Term Refinancing Operations, which comprise affordable loans to financial institutions, by 25 basis points. The rate on these loans, as of March 12th was -0.75%.

In addition to the above actions taken by the ECB, individual countries around the Eurozone, including Germany, France, Spain and Italy have put in place various forms of fiscal and/or monetary stimulus.

The United Kingdom has also put into action monetary and fiscal stimulus measures. The Bank of England has cut interest rates by 65 basis points while also announcing a $200 billion pound bond purchasing program and access to cheap credit. Fiscal stimulus measures include $330 billion in loan guarantees to businesses and an offer to pay 80% of wage bills if staff are put on leave.

It is difficult to gauge how long this crisis will continue and the longer-term effects it may have on world economies, businesses and existing supply-chains. Things could get worse before they get better and we anticipate capital market volatility to continue in the near term. In the last two weeks, we have seen the 11 plus year bull market end, only to be followed by a new one as markets have risen more than 20% off their lows in mid-March. However, trying to time the right moment to sell or re-enter the market is often more problematic than remaining invested. Market timing attempts, especially during turbulent times such as this, often results in emotionally driven decisions to sell at inopportune times (during/near market lows) and miss the rallies that follow. Is this instance truly different? We expect, in good time, we will most likely determine that it was not.

Historically, markets have shown an ability to recover quickly from health crises. In 2003, the SARS virus outbreak was in the headlines, largely affecting China, Hong Kong and Taiwan. This outbreak provided a useful framework for investors and policymakers to follow. The “social-distancing” we are all familiar with and practicing now, was something that had been ingrained into the Chinese population from that period.

It is our view that equity markets are not properly reflecting the underlying fundamentals of individual companies and industries at the current time, but rather are largely being driven by headlines in the news and financial literature. This is conveyed in Graph 1 below, which illustrates how much coverage the recent virus has received relative to previous outbreaks going back to the early 2000s. 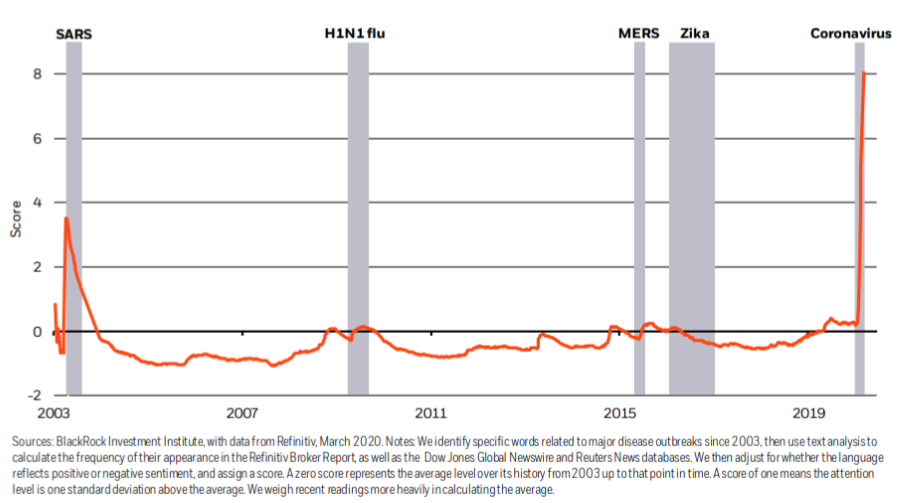 Further, research dating back to January 1924, shows that bull markets have generally lasted longer than bear markets and have generated returns which have considerably surpassed the losses incurred in preceding bear markets. 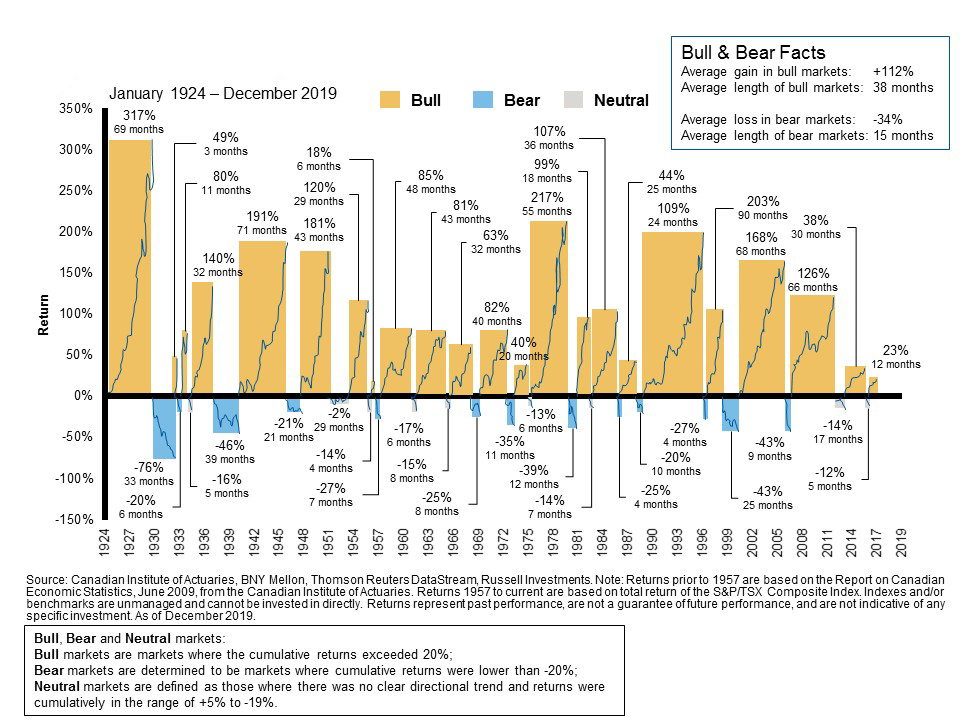 While there is no quick fix to this pandemic, our capital markets are underpinned by an unprecedented amount of both fiscal and monetary stimulus. The speed and historically unparalleled extent to which global governments have responded to the social and economic threat posed by the COVID-19 virus, combined with the willingness and flexibility to act further if necessary, provides in our opinion, a substantial degree of support for sustained long-term economic and capital market growth.

Unless otherwise indicated, information contained herein, was sourced from Alliance Bernstein, The New York Times, Reuters, Statista, as of March 27, 2020 and believed to be reliable. These commentaries intend to provide you with general market information and should not be relied upon as comprehensive advice applicable to the circumstances of a specific individual. Opinions expressed are of those of the author based on the information obtained as of March 27, 2020. Caldwell Investment Management Ltd makes no representations or warranties on the information obtained from external sources referenced herein.  We strongly encourage individuals seek personal professional advice.